I will be flying 3000 miles to run The Pittsburgh Marathon for the third time in May. Worth it?  Yes.  Absolutely.  As soon as I had run my first marathon (to make sure I could) there was no doubt Pittsburgh would be my second. The tagline for the race in 2014 was 'Run Home Pgh' and that's how I feel every time I'm there.

If you live there you probably already know, but here's 5 reasons from an aht-of-tahner why I love this race and this city. 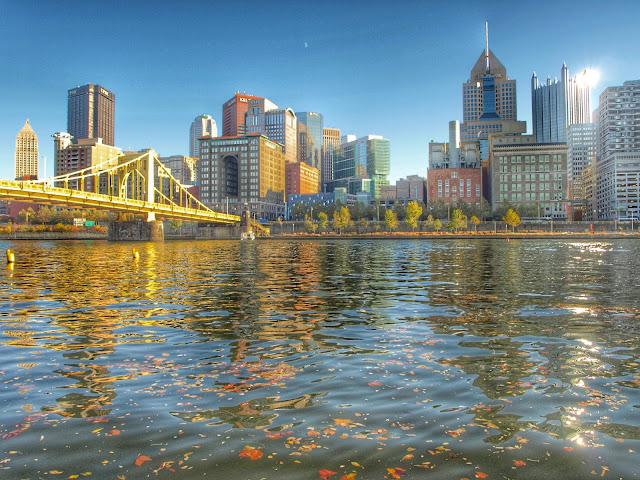 Pittsburgh is gorgeous, it's surrounded by three rivers and rolling hills and it's surprisingly green.  The sharp architecture downtown featuring those stunning yellow steel bridges will impress you.  The hill we climb during the marathon (Forbes) will not impress you.  Or me.  On the plus side climbing the hill means a peek at the Cathedral of Learning and a stroll (or wheeze) through a collection of college and vibrant urban neighbourhoods. That's my favourite part of the race.  It's also where the beer is at. 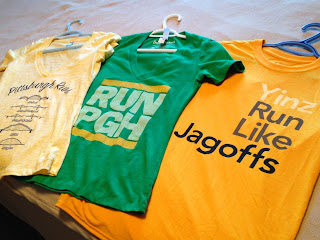 These are actual things. They have their own entire language here. Mr Rogers, the nicest guy in the world, is from Pittsburgh.  My best friends live here.  The friendliness I encounter just makes my heart happy.  Roads might be a bit of an exception to this rule - don't drive like a jagoff.

Six Super Bowl titles, Four Stanley Cups, Five World Series titles.  The new Half route runs by all 3 venues, that's pretty awesome.  If I wasn't committed to 26.2 I would be all over it.  After running by, you can catch a Pirates game (with a spectacular view of the city) and hopefully a Pens playoff game.  This year is the Pens 50th anniversary which means I get extra pizza.  Just try to argue that with me.

Although this race is huge (30,000 finishers) it still feels personal.  Race day is extra special with people carting out parking chairs and signs all along the route. When they hand over your epic medal (and it is epic) you are officially a Runner of Steel. That's pretty awesome.  Also, one weekend, three medals.  Are yinz registered for The Steel Challenge yet? 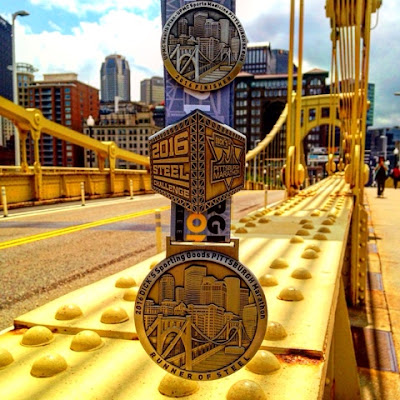 There's a bunch of really interesting stuff that's all Pittsburgh - pierogies, fries on sandwiches, Clark bars (we're not going to talk about chipped chopped ham).  All of it tastes good.  After you collect a medal, you get a smiley cookie from my absolute favourite local diner Eat'n Park - winning!  Check out some actual food sites before you go, there's a huge variety of restaurants.  Or just eat pizza and wings and drink beer for 10 days like I'm going to do (...after the marathon).

This is so much more than just a race.