When I first heard about Spooky Empire I thought there was no way we'd be making it.  However, sometimes the stars turn and a time and an opportunity presents itself.
Here's your (magnificent) Twin Peaks cast lineup:

Look it's Agent Cooper!  I honestly never expected to see him at a fan expo and still didn't actually think I'd see him until he was literally right in front of me.
Our journey to Orlando involved a flight to Atlanta then a 7 hour drive.  Apart from a long delay getting to the rental car office in ATL, it went perfectly.  What a wonderful change.
Friday (will call, vendors, foam workshop, autos - Ray Wise, Kimmy Robertson, Robyn Lively, Carel Struycken, Candie Mandie Sandie photo)
We had been at Universal's Halloween Horror Nights until past 2 am so getting organized was a slow process in the morning.  We also took what turned out to be a hellishly long and hot detour to the OC Convention Center (West).  It's actually right across the road from the Hyatt.  Our glorious Hyatt with 24 hr market (hello 2 am pizza), pool, and excellent Spooky Empire rates.
First port of call was to collect event passes, T shirts and poster then walk around the vendor room.  That was really easy and fun.  Although the poster was gorgeous, I thought we'd have issues using it for autos since it's card and couldn't be added to the poster tube.  Instead we purchased this beautiful art from Chelsea Lowe.  Nothing makes me happier than fan designed goodness.  The talent and imagination of Twin Peaks fans is next level. With the Twin Peaks VIP pass we had access to the autograph room an hour before GA each day, today was at 4 pm.  The very first person we saw was Ray Wise.  After 30+ years of watching the show regularly (on TV and VHS then Blu Ray.... then cable) it was so surreal to see and hear Ray.  I found the familiar sound of his voice quite overwhelming. He is an absolute gem. 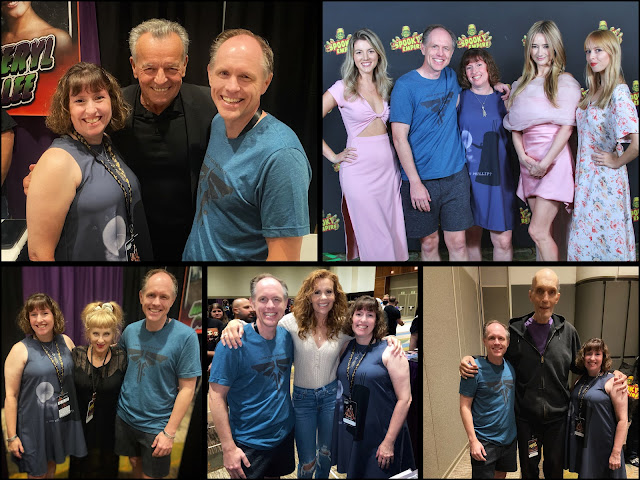 Kimmy named my new bag (Owly), Candie Mandie and Sandie were simply perfect, Carel was magnificent and Robyn?  Everything I said came out wrong.  How unusual for me.  I had even written down a line I wanted her to add - nope, every piece of sense vacated my mind.
That's a wrap on Friday.
Saturday (Kyle auto, OITNB photo, Kyle photo, autos - Sheryl Lee, Mädchen Amick, Dana Ashbrook, Ginger Lynn. John Neff meetup, VIP party)
Officially Kyle-day.  By the time we got over (10:30) there was already a large VIP queue.  While waiting we did have the privilege of watching some of the cast go over to talk to Kyle, Sherilyn was especially touching.  James also convinced me to increase my expenditures with a selfie add. 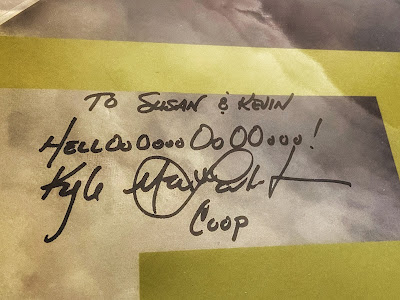 Agent Cooper was extremely pleasant, he was genuinely interested in the fans and meeting him was a real treat.  I had a couple of (actually coherent) questions which he answered thoughtfully.  We got our selfie then I had to all out sprint over to the photo hall as I was about to miss my Lori Petty and Taryn Manning op.  Our sweet angel Carmine let us go ahead of him in the Kyle line for that bless him.  Did you know people flew in from Italy and the UK for this?  I think that's absolutely wonderful, especially after the last couple of years. 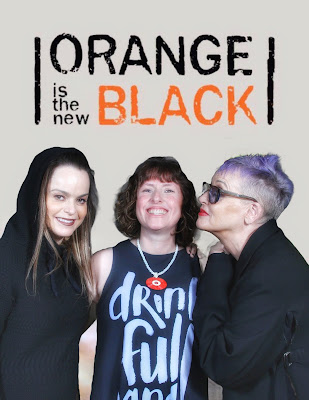 Not the actual background, it was in fact this messy state of affairs below.  We had our Kyle solo op right after.  This was part of the TP VIP package as was the autograph. Thank goodness Kev wore something bright. 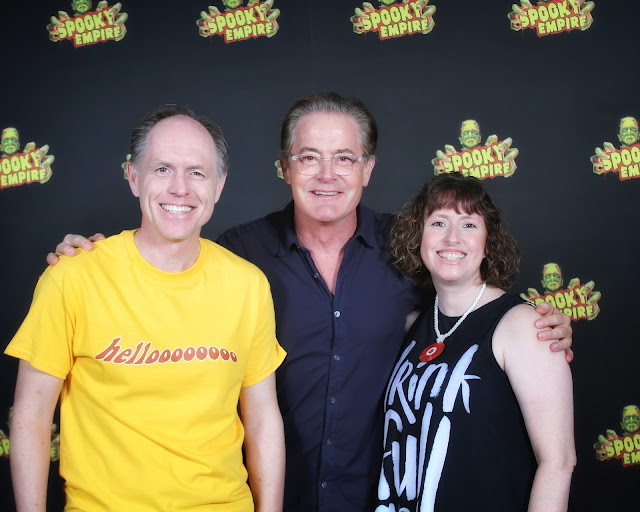 There were tons of food options at the OCCC so we had no trouble eating, as long as we remembered we should actually eat.  On Saturday afternoon we got autos from Sheryl Lee, Dana Ashbrook and Mädchen Amick.  While waiting in line for Miss Shelley I got the chance to see loads of cosplay. 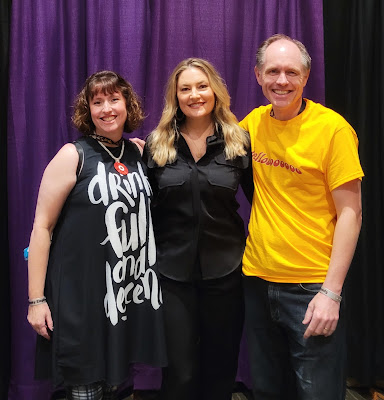 I brought our Devil's Rejects poster down to be signed by Ginger Lynn Allen and Dan Roebuck.  Meeting Ginger was so lovely.  Sid Haig talked about their scene last time we saw him (rest well Sid) and this time Ginger gave us her perspective.  Then we did this.  I love her. 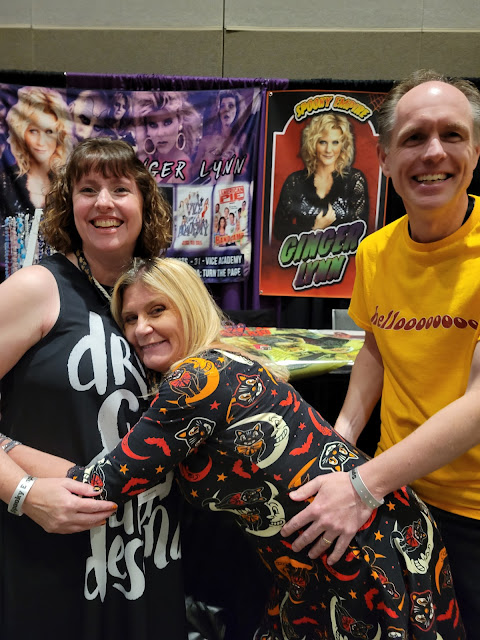 After the day's festivities we had a meetup for the insanely talented John Neff in our lobby followed by the VIP night.  It's not often I get the chance to be around so many beautiful bright souls. 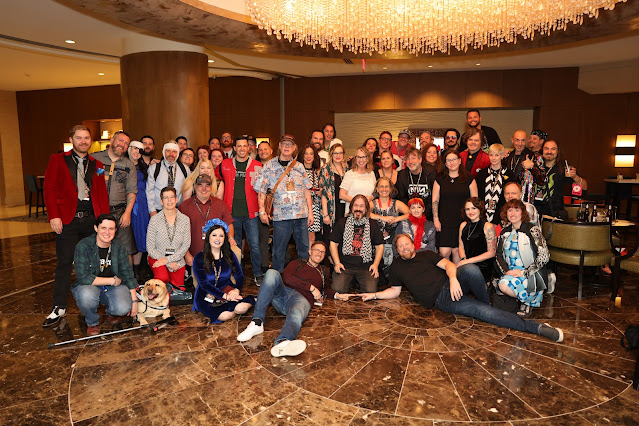 There were free drinks at the VIP party and that's all I have to say about that.  Mandie and Sandie did the Timewarp on the dancefloor that was also fun. 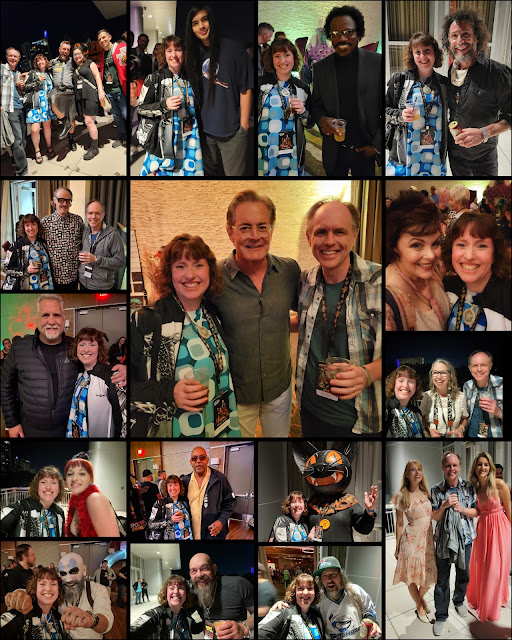 Sunday (Dan Roebuck auto, Full cast panel, Cast photo, Lori Petty panel, Sherilyn Fenn auto)
The last day!  I achieved a brand new level of tired.  Our first port of call was Dan Roebuck with the Rejects poster, what a lovely person he is.  He remembered me from the night before which was very touching (I will assume for good reasons).  We then joined the line to get into the cast panel.  Spooky was playing the TP soundtrack and it was quite emotional.  The Diane cosplay was a huge highlight, particularly when 'Diane' addressed those who were unfamiliar with her character. 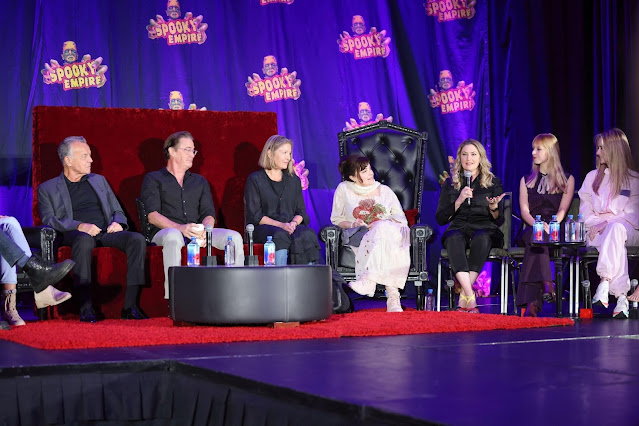 The cast panel was both beautiful and terrible as it was nearly the end of this great gorgeous thing.  Ray sang, Madchen cried, Sherilyn giggled, Kimmie told magical stories.  The whole thing can be viewed here.  Credit for photos including all our group ones and the cast video goes to Steven Miller, one of our talented creative tribe. 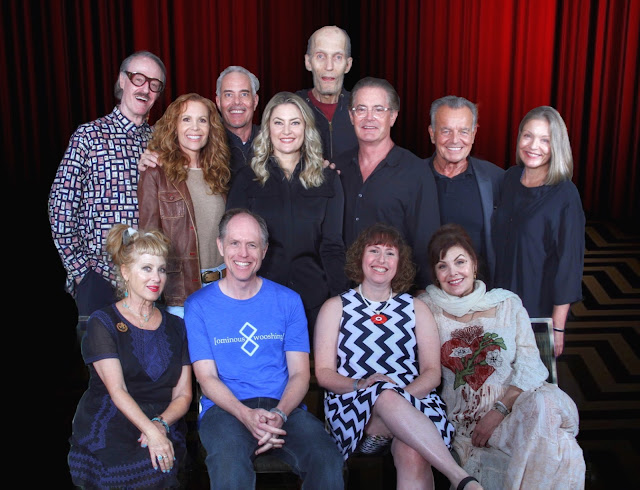 The last thing (apart from goodbyes) was an extraordinarily expensive cast photo.  True to form I did not think this one through.  At least I had shorts on.  I do think the photographer could have been much better at a number of things at this event, especially given what they were charging.  For example, why not have a Twin Peaks backdrop?  Photoshopping this off the actual background was hellish. 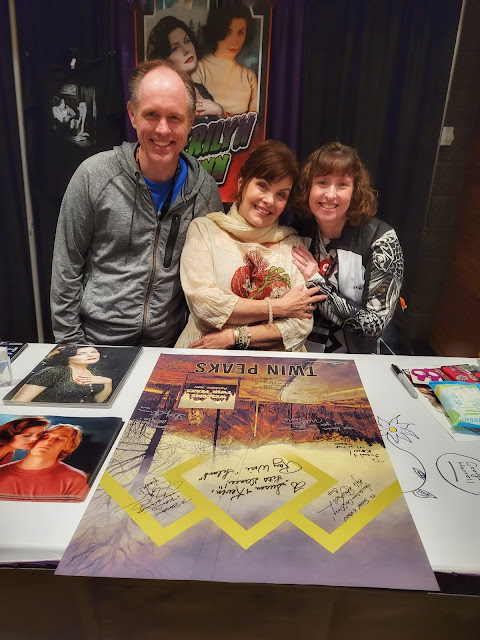 Our last visit was with Sherilyn Fenn who I love very much.  We have met her at three different events now and I always look forward to seeing her.  Our Audrey. 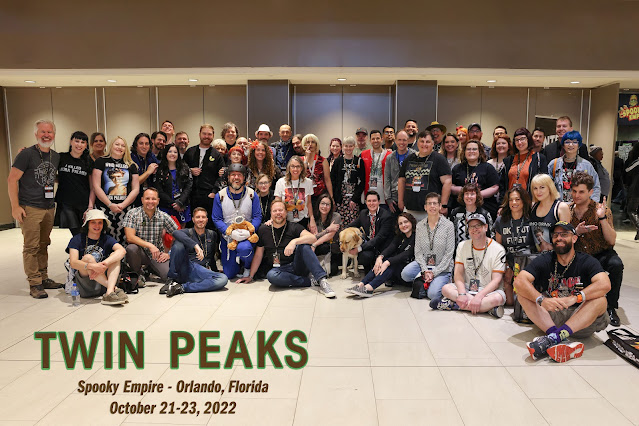 Hell of an event.  VIP was worth it just for the Saturday night party alone.  When you factor in the Halloween events at the surrounding parks it makes for such an epic weekend.  In fact, to combat the post event depression we went to Howl-O-Scream on Sunday night.
What a great time we had at our TP Woodstock in the palm trees.
Labels: Cherry Pie Damn Fine Coffee expo Halloween mental health nerdlife other humans TP fam travel Twin Peaks