I usually do an end of year post and about a million years ago I also did a 'goals for the next year' post.  Things like marathon PR's, weight stuff, swimming (lol) hey that did not go well.  Who even was I back then?  Since then survival has become a bit of a recurring goal.  I think goals will be determined as we go through 2023, but in summary 'do a bit better' and perhaps 'be a bit less fat' and 'go back to the UK yay'.

2022 was certainly interesting.  We went to Las Vegas in Feb mostly because we couldn't get a deferral or refund on our race entry for Rock n Roll and we had an expiring flight credit.  Despite the testing stress and paranoia both ways, we had a very excellent time.  As you know one Rock n Roll race leads to another.  San Diego was fantastic.  That time we only had to test to go to the US.

In August we went to Palm Springs and get this - no testing at all.  PRAISE BE.  FYI it's far too hot there in August.  Following that we had an outstanding Orlando trip in October to round off the year.  Travel actually went smoothly there and we were able to go to Halloween Horror Nights at Universal plus Howl-O-Scream at SeaWorld and also attend the Spooky Empire Expo.  On the way back we stopped off in Senoia, GA (home of the Walking Dead).  A truly magnificent trip. 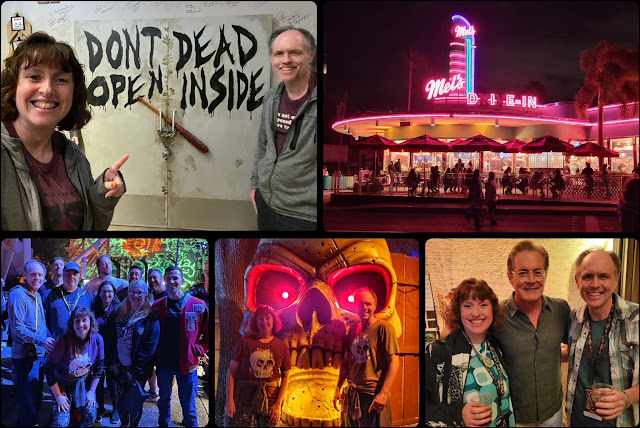 We only did 2 race weekends this year mostly due to my physical issues which fingers crossed I am now on top of.  We attended 4 Expos - Calgary, Calgary Horror, Edmonton and Spooky.  They were without exception amazing.  We went to the movies a lot, saw Modest Mouse and Boney M live and went to the Cowboys tent at Stampede for a drag show (I am too old for this).

The lowest points were losing Jack and my Gran within a month of each other.  That was bullshit.  We also lost the Queen this year, that seems crazy.

The highest point was checking out the sets of The Last of Us in and around Calgary (pic below is in Olds, AB - they voted to keep the mural which was painted for the show).  I enjoy being gainfully and deeply obsessed.  The show starts on HBO in 10 days.  Also, being around other humans again - concerts, events, bars, anywhere.  I have missed the energy of other people (sadly my place of work has yet to get that memo). 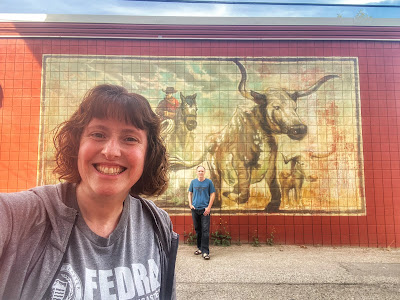 Other stuff - I've gained all the lost 2020 weight back (JFC), strength trained twice a week, removed myself from Twitter, been removed from Instagram (?) and started learning to crochet.  I want to be a runner again but I think I can live happily without hashtags and likes.

Finally, I made this and I'm very proud.  I highly recommend crochet for anxiety and mental wellbeing, and cuteness.  Adorable pattern by EmSaCrochet.  Not pictured - his cute little bear tail in back. 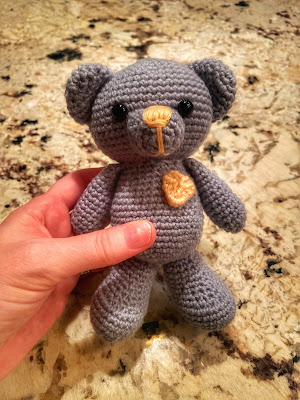