This race was rescheduled from June so it went from being a venue to try out our recent speed training to 'oh crap we have to run 10k 2 weeks after the marathon'.  It was both a colour run and a chip timed run with medals.  Intriguing! 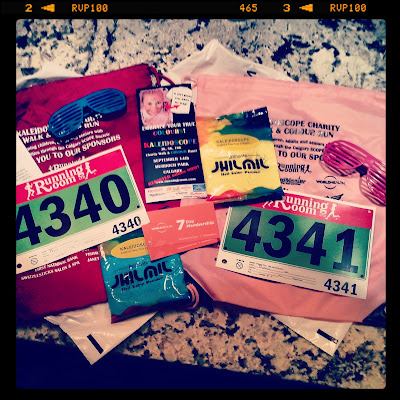 
We immediately hit stopped traffic on Deerfoot, take a detour and come upon a parade (a parade!) in McKenzie Lake and get stuck again.  We have no idea if there's parking near the start plus we're now fairly late so we park downtown and walk over to Memorial then up to Murdoch Park.  Can you say disorganized?


We arrive at the start with our colour from the race kit, they are BIG packets.  I am so excited as one of ours is blue and we didn't have that in Color Me Rad.  I was unable to indulge my inner smurf.  We are standing around with a bunch of VERY colourful people, they are embracing the spirit of the thing for sure.  Out of the blue (and pink, lots of pink) there's Cori (yay!)  We help each other out with personal decorating then far too quickly they're calling us to the start.  Once again I don't get a photo *slaps forehead* but Cori does! 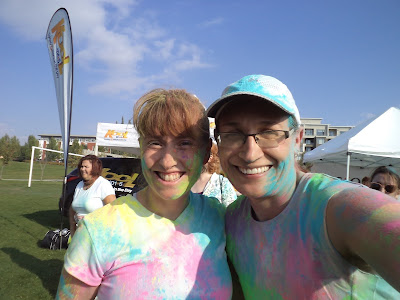 The start is madness, we set off over the line and get sprayed with water from several hoses then enter a huge cloud of colour.  No-one can see, it's like being in the middle of a rainbow, we're tripping over each other.  The path leads to Bridgeland LRT so we climb then descend the overpass onto Memorial.  Right around here I realize a sub 6 min pace is just not going to happen today so I slow down to enjoy running with the rainbow people.  We get a lot of looks from the other pathway users.  There is a guy in front of me briefly with the most beautifully coloured bald head!  I am in too much of a mess to extract the camera from my Spibelt.


The kms click off, it's not too hot and there's a nice breeze.  Since I'm wet from the hoses I have some issues with chafing (again).  The Spibelt digs in and my feet are complaining.  It's one of those races that just feels like a struggle.  The Scope volunteers are spread out along the course and they are so encouraging, they are genuinely excited to see runners!  Eventually we pass people running back, Kev is fourth.  I yell something very encouraging to inspire him into third.  I hope.  Chances are other than F words, it's unintelligible. 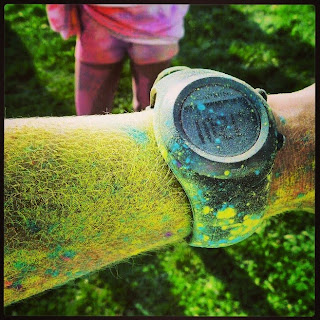 We turn around at a water station, the orange Scope volunteers are doing a great job at these too.  It's warmer on the return leg as the sun has come out and we're facing into it.  Soon we are back at Bridgeland and I run up the overpass, it just about ends me.  Good grief.  There's a small grassy rise then there's the finish line.  I get comprehensively sprayed with more water - sigh.


We are done, hurrah!  (1:08:51) We get a medal then have a seat on the grass to dry out.  There's a great selection of food available, chips, orange slices, hot dogs, juice, water. The awards/prize draws take a long time as they are giving out top 3 in every division for the 3k, 5k & 10k.  Kev has placed 3rd overall in the 10k, even though it wasn't a PR for him, he is also 1st in his division.  This is brilliant, I'm so proud of him.  How the hell he could run when I was barely plodding along I will never know. 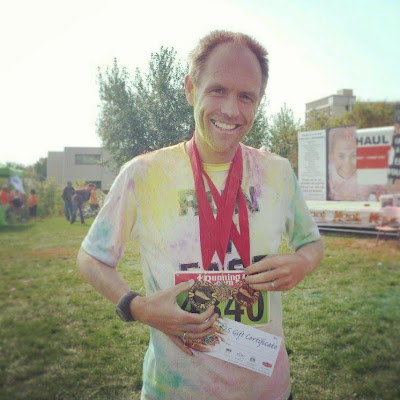