On my 2013 Hypo race report I made a note that although we had great weather (-1°C no less!) previous years had not been so lucky so I should think about that before registering again.  This race sells out well in advance so I immediately forgot all about that and registered.  The 2014 race temperature is -16°C with -25°C (-13°F) wind chill.  And snow.

After getting distracted by a very friendly Pepper in the house we get on the road slightly later than planned and immediately find the route we planned to take has several accidents including 2 jacknifed semis.  The overnight snow combined with cold apparently caused havoc.  We finally arrive in the parking lot opposite Starbucks right on 9:30, much later than I would have liked.  The walk to Fort Calgary is slippery and cold.

Since it's a small race there's plenty time to get organized inside and we soon find Tina, Cori and Tara.  After much swearing and apportioning of blame we notice people are heading out.  The start line is in a different location from last year and we find ourselves right at the back.

As we head out we double back through Fort Calgary and pass the start (again) before hitting the riverfront pathway.  Immediately I notice the km markers are out by about 1.2km.  Will we turn around early then?  This turns out to be the optimistic view.

I'm struggling to breathe, run and talk so at around 2km (on my watch) I crank up my music and head off in pursuit of the 2:45 pace bunny.  His little pink ears are taunting me.  The Bow River to the right is frozen and full of icedrifts with a narrow water channel in the centre.  It brightens up as we leave downtown though the wind at points is chilling.  My hands get quite hot so I remove the handwarmers in my mittens, then a few minutes later also the mittens which I have to stuff down the front of my top.  Not a comfortable run.

In the next section heading toward Crowchild, I pass Mr Bunny and continue forward progress to the turnaround at 10km.  This is the first (and only) water station on the course.  I filled my pack with hot tap water and Tailwind this morning so I don't need water.  Thank goodness.  A lot of people had water bottles with them which froze leaving no alternative, not a good state of affairs.

I pass Cori and Tina again after the turnaround then it's just a case of moving forward.  The km markers are still way out so now I decide they must have changed the route at the end due to ice.  More misplaced optimism!  As we approach downtown at 16km (on my watch) we enter cloud/fog with biting headwind and snow granules.  This is getting tough. 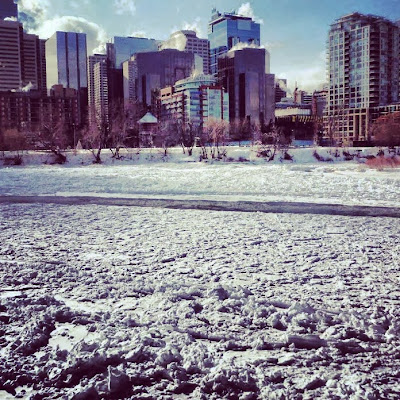 Continuing along Memorial with no-one in sight, I wonder if I'm going the right way so I wait for people behind me to catch up.  We decide this is right and eventually go up to the zoo bridge (and sure enough there's the RR direction sign), turn right, then the path turns to a snowy mess.  I usually avoid this section if I'm running from work in the winter. 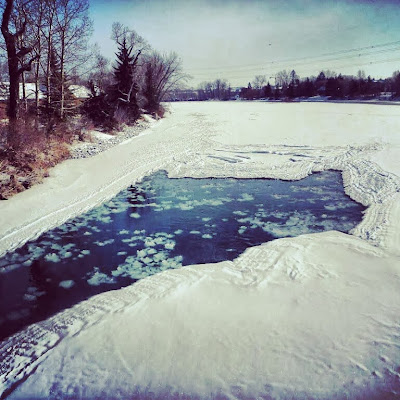 The bridge over the river is full of hidden ice patches underfoot then as the path continues west through Inglewood it gets much worse with ice covering the entire pathway.  I pause to ask thin air 'are you f'ing crazy?'  Not impressed with this route.

9th Ave is the home stretch and I'm already well past 21.1 on my watch.  That's okay, getting in a little extra distance is a good thing.  I am entertained to find I still have to run down the length of 9th before bending in to the finish line.  It's finally over!  I did beat the 2:45 pace bunny but had a final time of 2:46.  Out of the 5 people I knew running, including Kev, we all had personal worsts today.  We all however beat the cold, the crappy extended route and lack of water stations.  I am proud of every one of us. 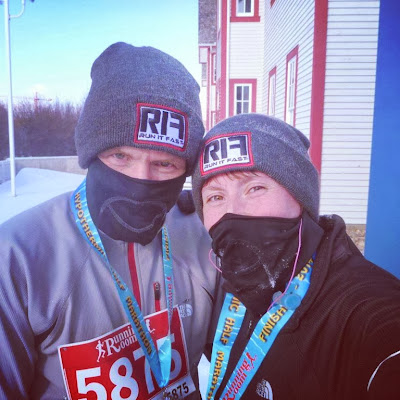 Plus we all earned one of these:

Then we headed into Fort Calgary for lovely fresh warm scones.  There was quite a spread but I find it hard to eat after a race so stuck with fruit and scones and of course, hot tea.

Despite my time I actually felt much better during this race than in my previous 2 Halfs.  I ran almost all of it, albeit at a slow pace, had energy for the most part and felt pretty awesome after I heated up.  That lasted all weekend.  So that's why I do this to myself!

The weather the following day was even worse with temps in the -20's and wind chill in the -30's.  Reminder: THINK ABOUT THIS BEFORE SIGNING UP FOR 2015!!
Labels: Hypothermic Half PW race running