He's Got An Arm Off

I'm linking up with Amanda over at Running With Spoons for a little random brain-airing today.

Kev broke his wrist playing football (aka fitbaw/soccer) and he's been stuck in a hard cast for the last month, finally it looks like he'll get it off in 2 more weeks.  This is good as I'm a horribly impatient care giver type person.  Sorry dear.  To my credit I haven't accidentally hit it or sat on it or tripped over it yet.


I am celebrating my 2 year anniversary as an INKnBURN ambassador in February.  The first race I ran as ambassador was Jackpot and I'll be taking on the 24hr edition of it next month.  I'll have many comfortable wardrobe choices to get me through the sunny hours and the nighttime ones.  I love everything I own from InB.  It frequently gets me out the door when I'm having don't-wanna issues.

I started eating better on Monday and 4 days in I feel like total crap.  I'm hungry, I'm heavy and I don't want to look at myself in the mirror. If I feel crappy and look crappy I just want to eat and forget the whole thing.  I weighed myself last weekend and it was awful.  Current status: hopeful of progress but don't show me pizza.

We bought a treadmill before Christmas as it's freezing, icy and snowy AF out there.  I got so much happiness from putting on shorts and a bra (because it's basically my own personal gym) in -30 and hitting up the old TM in the garage.  The new one will be living in the basement which we had wired up last week.  I am so excited to make this happen.  DELIVER IT BITCHES!

Randomly, I was colouring in a thing online and realized I've been to 43 US states so far.  I have completed races in 8 of those. 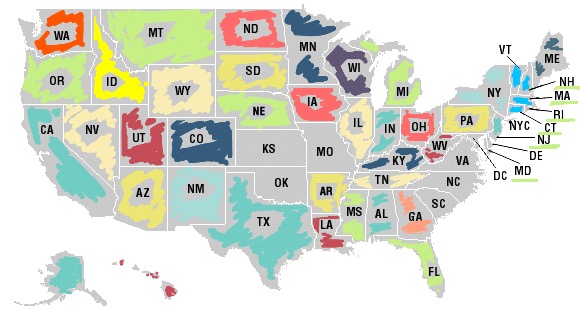