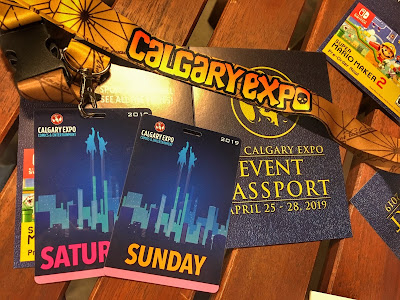 In all the years we've lived in Calgary, we seem to be away whenever the Calgary Expo rolls around.   I have been to the Parade of Wonders a few times and I'm always sad not to be able to visit the actual event.  The costumes are fantastic!  This year it was on.  The Expo fell the weekend prior to our Pittsburgh trip and no particular running was on our schedule so we picked up tickets for Saturday and Sunday.  Excellent.

Additionally, there was one big motivating factor.  I was all over this photo op.

I slipped out of work for an hour to watch the parade on Friday, that's the official kickoff to the weekend.  I was not expecting so many of the celebs to be in the parade!  Top: Chris Lloyd and Lea Thompson - BTTF, Catherine Tate - Dr Who.  Bottom: Sean Astin OMG. 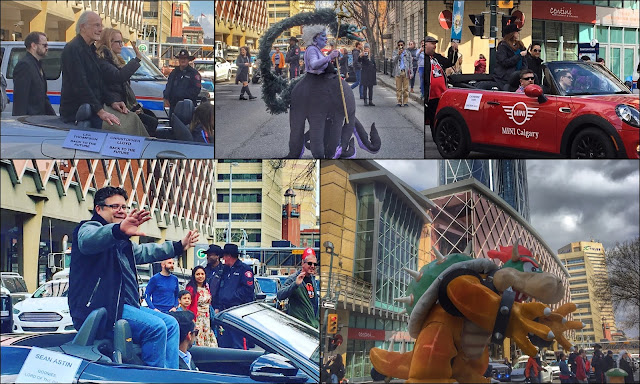 I was so excited by all the hoopla, I convinced Kevin we should add a Michael J Fox photo op to the weekend.

We parked at the Stampede Grounds and exchanged our receipts for daily passes without too much fuss.  There was a lineup but so many people were in costume we had plenty to keep us occupied.  Stampede seems like the perfect location to me, there was a huge food hall with games and an artists floor upstairs, another hall with vendors (also huge), a theatre for panels, an arena for bigger panels and a separate hall for photo ops and autographs.  Food trucks were outside and mini donuts were everywhere.

This is pretty much the first thing we did.  Yes Kevin it changed my life and it was worth it. 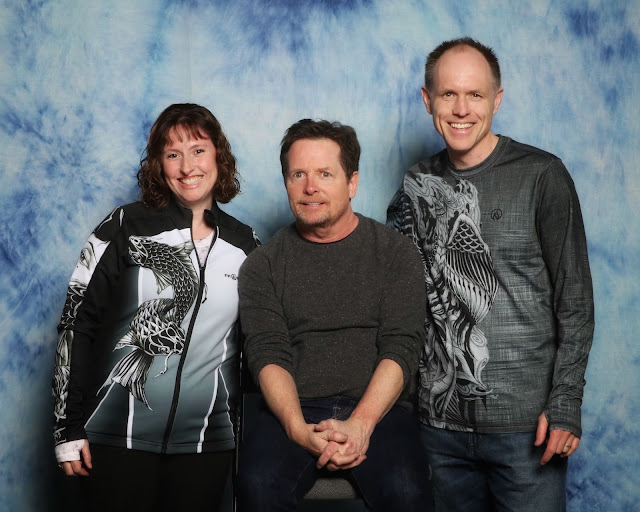 This was also amazing, please enjoy the Flux Capacitor over my right shoulder. 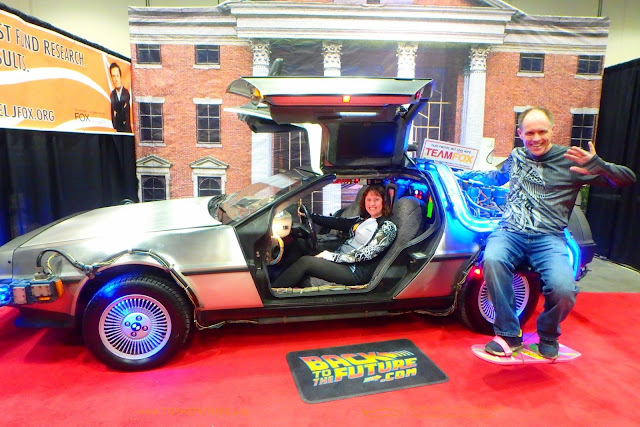 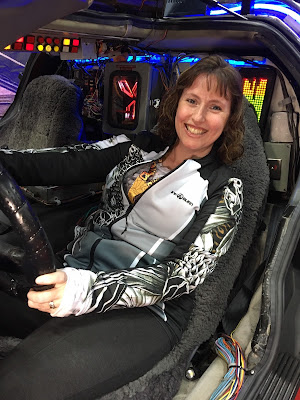 We attended our first panel on Saturday with James Tolkan and Lea Thompson (BTTF).  I got goosebumps when he said one of his lines from Top Gun. That was special. 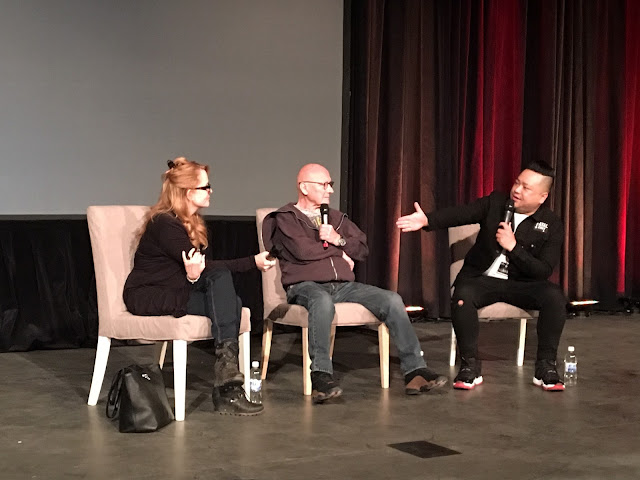 We also saw Peter Weller (Robocop), the Shazam cast and to end Saturday we stayed for the Cosplay competition.  All of that was included in the entry pass price - the only extra was the photo op.

The last time we were outside was at lunch with a hint of snow flurries so we were quite shocked to emerge into insane amounts of snow in the evening.  Roads had been closed and apparently it was January again.  Please add your own GoT joke here.

We took advantage of the relative quiet to investigate every inch of the vendors hall in the morning.  We walked about 6 km both days, surprisingly. 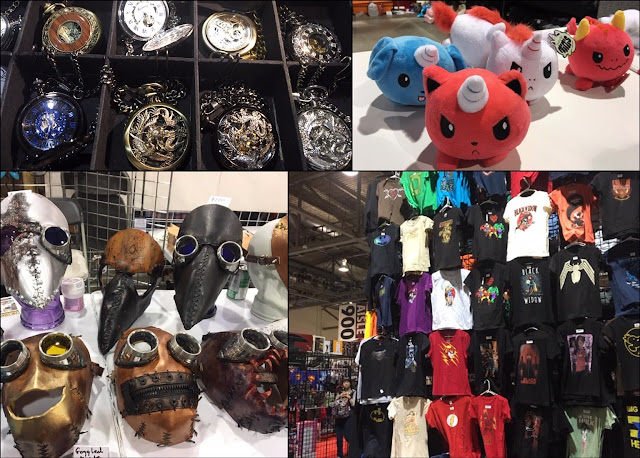 Then THE photo op.  I had the T shirt made specially! 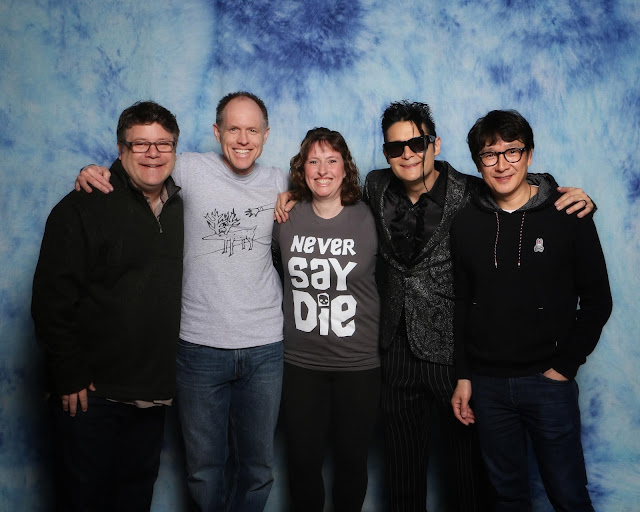 A photo op at a big expo is basically staff rushing as many people through as quickly as possible.  It was still amazing.  Corey Feldman y'all!  If you're doing this I recommend thinking about what to say and how you want to pose in advance.  I became overwrought and forgot to hold my chins in.  We were told where to stand for this one, I think it came out great though.

There were loads of ops available: 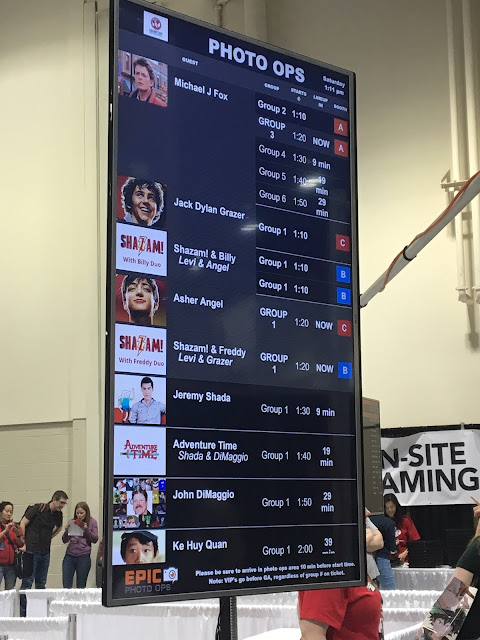 Here's all the lineups waiting to go in, everyone gets a numbered lane about 15 mins before the time slot: 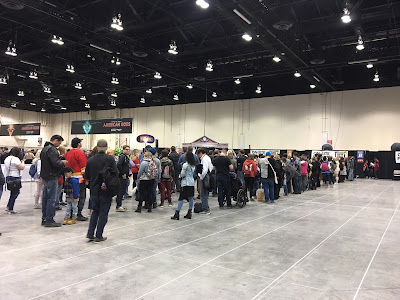 The Expo did a nice job of 'team ups' so you could get all the cast members of a show in the same photo.  FYI the entire BTTF cast op was $499.

We rushed to get some food before heading back to the arena for the Goonies panel.  We were so early we also caught the Transformers panel (Peter Cullen and Frank Welker). 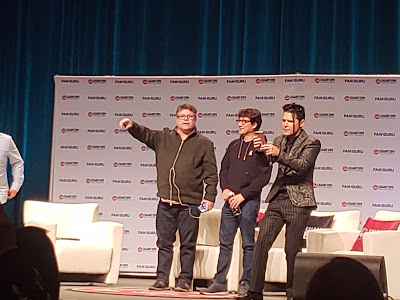 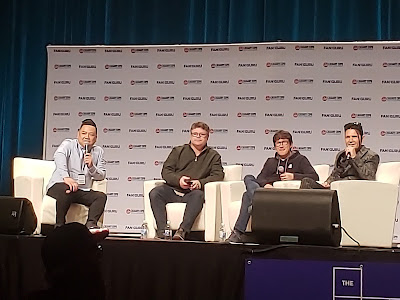 The panel was amazing although for some reason none of the audience questions were related to the Goonies.  Huge eyeroll.  2 of the actors pointed that out, and good for them.

We took in Pamela Anderson's panel afterwards, she is a smart funny beautiful compassionate person.  I hope she comes back to future Expos.

Highlights for me were the photo ops, panels, fantastic cosplay and sheer variety of vendors and artists.  We did not do any autographs this year though I heard Corey Feldman had a 5 hour lineup.

Another thing that impressed me was the inclusion.  Every body type, gender, persuasion and ethnicity in any costume or outfit their heart desired, feeling beautiful.  Being beautiful.  That's a world I want to be part of. 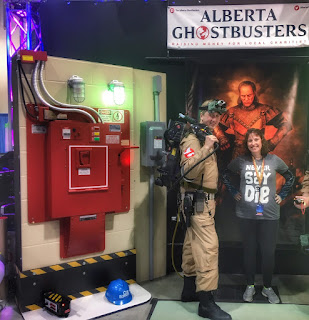