After finishing the Hollywood Half we got back to the hotel, drank a gallon of chocolate milk and packed up for 11.  I had originally looked at a scenic route out of LA but we decided just to take the freeway.  My calf was very sore and I knew sitting in the car wasn't ideal but what can you do.  Mapquest put our drive time at 3 hours to San Luis Obispo.

We stopped in Thousand Oaks for a Cheesecake Factory lunch at 12, the place was packed!  Traffic out of LA had been fine until 10 mins before we stopped then it got stop and go messy.  I'm still not sure exactly where LA stops, it seems to be made up of a bunch of smaller cities.  Either way, there's something to see every inch of the way.

We were back on the road at 1 and the traffic proceeded to suck all the way to SLO.  Plans to visit the beach were abandoned and we stuck to the most direct route, eventually arriving at 4. 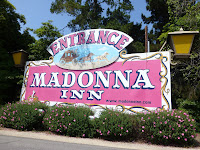 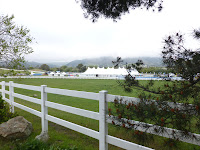 The Expo was a huge tent in a grassy meadow outside the Madonna Inn where we were staying, it was really lovely.  We shot through to pick up our numbers and shirts then returned to shop more extensively.  Bib numbers were allocated on arrival from a pile, I have never had an even race number and it looked like I was getting one now until at the last minute 3370 was swiped off the pile and I got 3371.

We checked in to the Madonna Inn afterwards, and I have to share some pictures of the room.  The entire hotel is themed, we had the Wilhelm Tell Room which included the 'rock waterfall shower'. 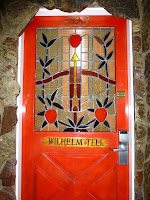 The front door was stained glass, as were the 3 windows (we are the lower level room).  Our room was a semi circle with huge boulders making up the exterior wall. 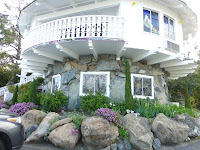 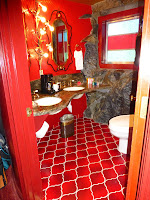 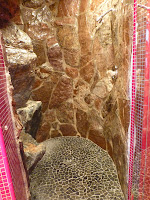 The shower was truly magnificent with water coming over a rock lip at the ceiling and also from the wall.  If I could recreate this at home I'd be all over it. 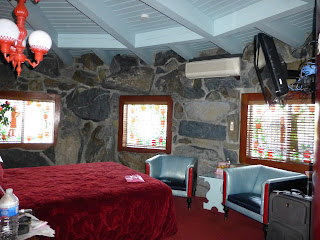 The giant comfy bed was exactly what I needed.  The little bag on the bed is fresh made cookies they give you at check in.  Each window has a different scene starting with Wilhelm and ending with his son standing waiting with an apple on his head.  I loved our stay here.  Deliciously tacky!