Yesterday I started fitness classes at work for the next 6 weeks.  I thought about another DietBet and there are a few interesting things such as run streaks and shreds going around the internet but in the end I took the 'lazy' option of work classes because I just have to turn up and do it.  There's nothing lazy about the actual classes!  2 of my instructors are multiple Ironman finishers and they are awesome awesome women.

During my first Bodyweight RX yesterday I became acutely aware of something - I am not fit!  We mixed in a lot of cardio (running) with core and leg plus some arms (pushups).  Between lunges and planks I was a wobbly mess and I struggled.  Today is all about the pain.

Now wouldn't you think with all the running and marathon training I might be okay?  Nooooooo.

The lunchtime fitness schedule looks like this: Tues - Bodyweight RX, Wed - Athletic Yoga, Thurs - Zumba.  Plus running, not structured - when I want for as long as I want.  I'm changing the focus for the next while.

We are heading to Las Vegas in 7 weeks for a break and I don't want to be heavy for all the outdoor stuff - kayaking & hiking - I have planned.  In 2011 when I lost the big schwack of 17lbs my goal was focused on a Las Vegas hol and I guess that principle has stuck.

Last week was a write off after the flu.  I did get out in the snow for a 5k on the weekend and now we're in the run up to the race itself (4 days!)  No further weight loss, I still have 6lbs to lose.  Coach A will run with me, his goal is to either keep me running or get me moving if I insist on walking.  Goal time?  I will aim for 2:30 or thereabouts.

I have got to stop checking the weather as I think I'm making it worse.  On Tuesday I accidentally pulled up the Montreal forecast, and believed it (+12, I thought it was a chinook)!  Currently we have:

Freezio!  Is this stopping us?  No it is not.
Labels: Coach A fitness half marathon training vacation winter running

Monday Monday (A Day in the Life) 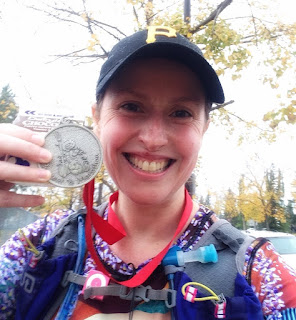