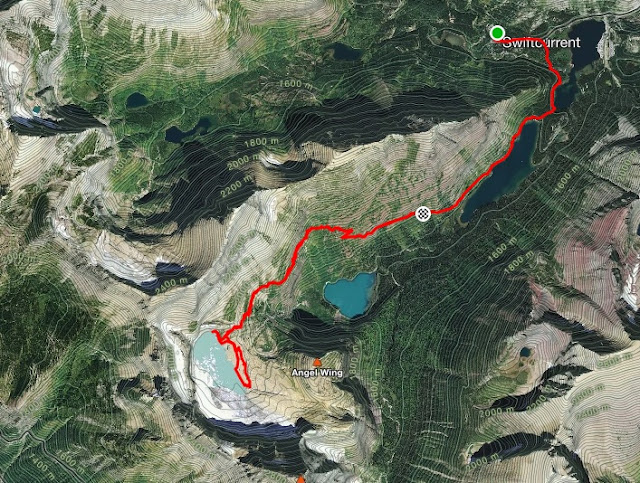 This hike was top of my list last year but it was hemmed in with winter snow still (yes, in July).  Although the elevation and distance aren't all that different from Iceberg it felt considerably harder.

We started out from our cabin at 8:30 am, it was already warm enough to wear a tank top.  We had to hike along the road to the trailhead where parking was already full (yikes) then head onto the trail by Swiftcurrent Lake.

After passing Swiftcurrent we hiked alongside Lake Josephine which was just beautiful in the early morning sun. 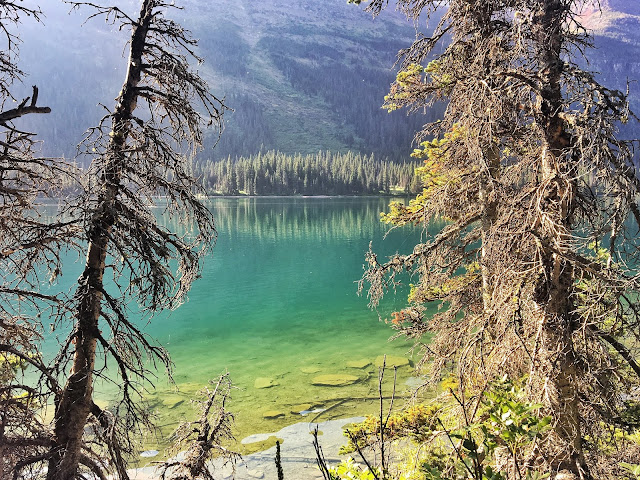 This is where we started to ascend.  Views gradually opened up to Grinnell Lake below and the falls at the far end of the valley.  What a perfectly still blue mountain lake.  There wasn't a single cloud in the sky.  We could see tiny people on the lake edge. 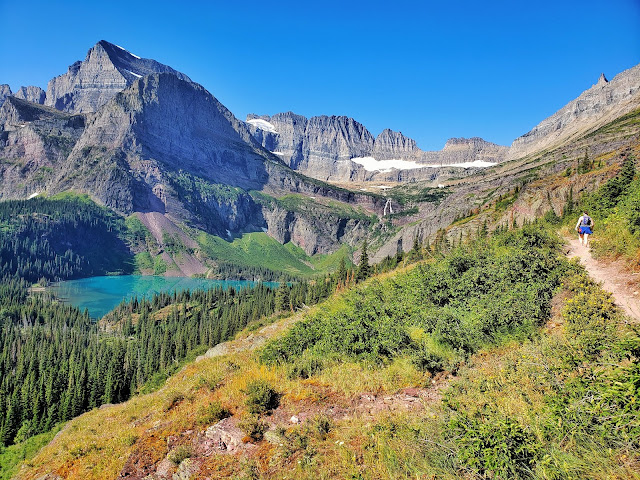 The trail itself was fairly rough and rocky with awful stone 'steps' at regular intervals.  After hiking yesterday and not being used to this it killed my legs.  It was also much busier than Iceberg.

Having said that, the trail constantly unveiled little secrets and treasures.  Here's one.  I named her Mittens 2. 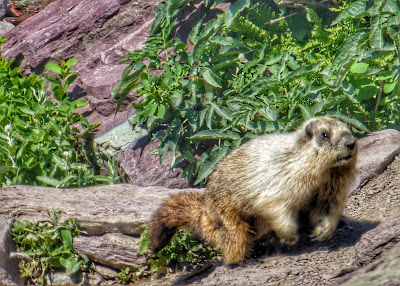 After a good bit of climbing we came out of the trees and found a series of waterfalls.  As we got closer to this one we realized why everyone was shrieking.  On such a hot day the freezing shower was very welcome. 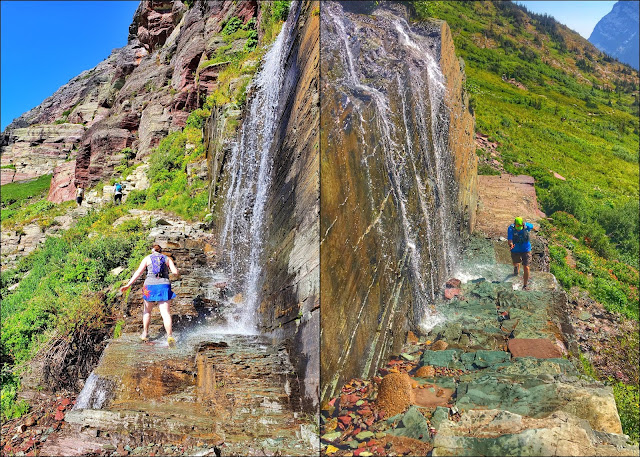 As we approached the headwall we had a great view of the falls - with bonus Beargrass. 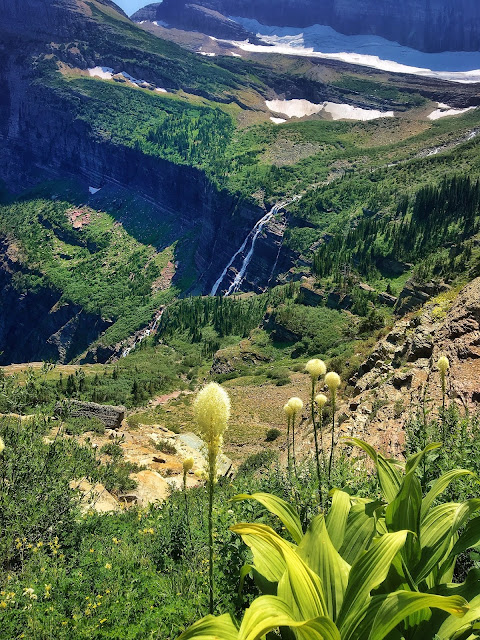 We climbed past alpine meadows then through a stand of trees and found the official reception committee.  Mouflons! 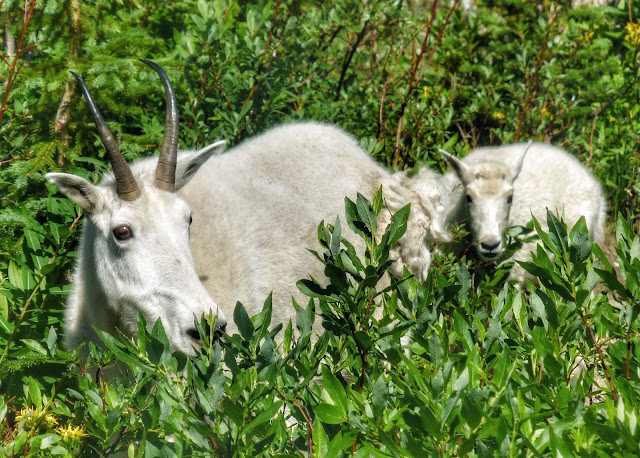 Next (and last) was a very nasty set of switchbacks up a rockpile into the lake area.  I felt those.  But look what appeared in front of us.

It's hard to capture the sheer beauty of Upper Grinnell Lake and it's many icebergs.  Salamander Glacier is above the waterfall.  Gem Glacier is the smol one high up to the left of it (smallest named glacier in the park) and Grinnell Glacier feeds into the left side of the lake. 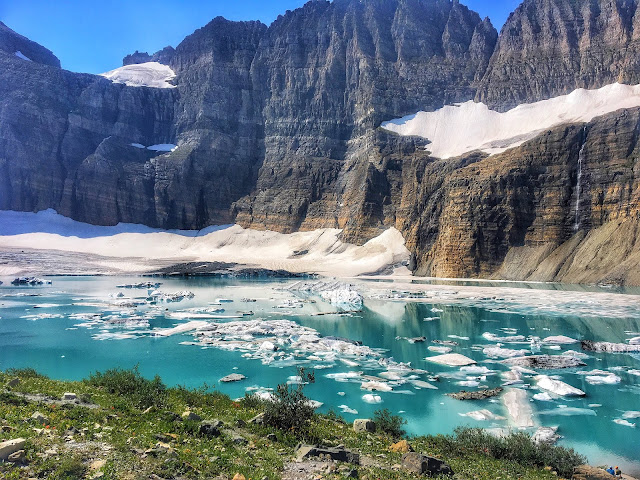 We went around to the right side for some quiet and a different perspective.  I was extremely hot.  Do you know what fixed that?

This did.  Coldest water I have ever inserted a body part in.  The trail was very dusty after all that heat, hence the tidemark. 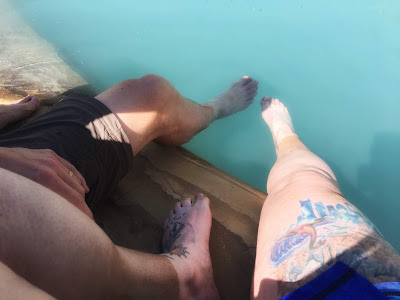 After an hour of lying in the sun we explored the rest of the lake.  We spent 2 hours up there total, and why wouldn't you?! 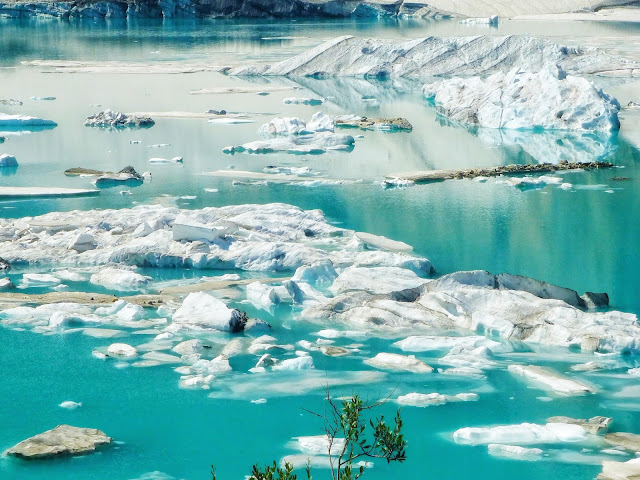 The central part was where all the people were.  Therefore it was where we were not. 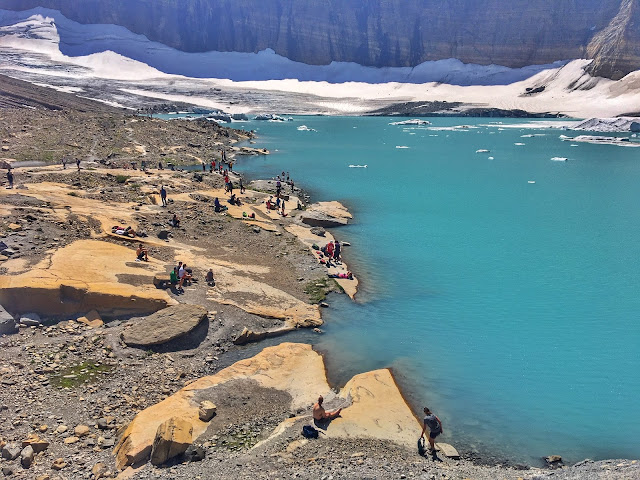 This is iron oxide and not the blood of Kevin's enemies.  It's really that red. 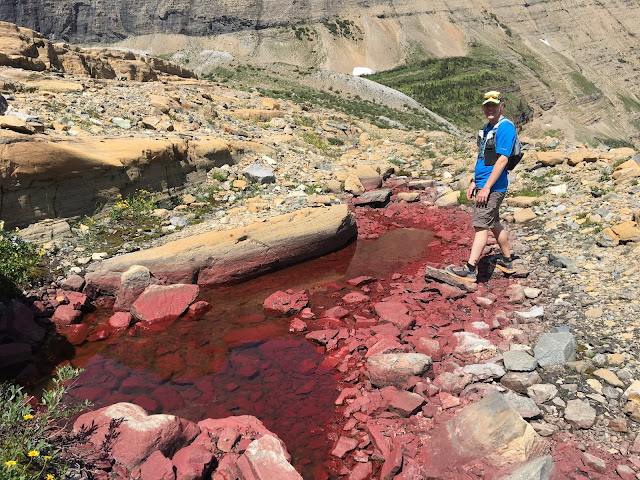 Another treasure, just where the rock meets the glacier we found hidden waterfalls. 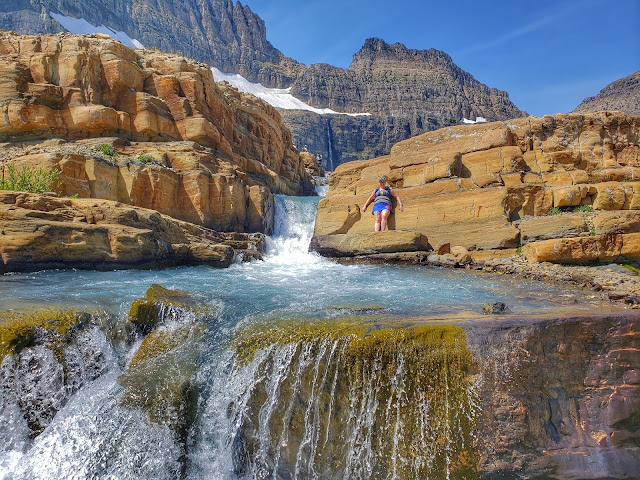 With a bit of climbing we followed it to where the water starts to descend over the headwall, eventually becoming the large waterfall behind Grinnell Lake.  The slight haze comes from wildfires.  I think that might also be the first wispy cloud of the day. 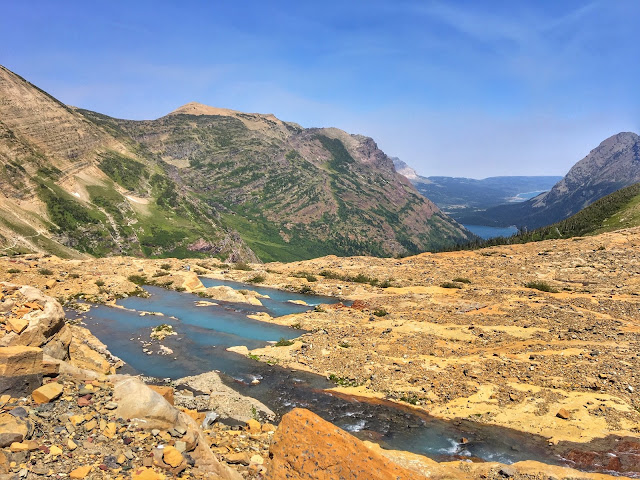 You can see the trail to the left in the picture above, and that's where we headed.  Of course we had to stop to look at Beargrass again. 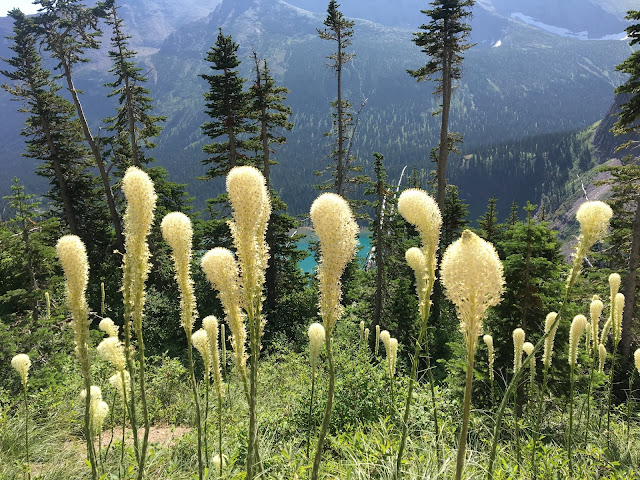 Just before reaching the rock waterfalls we spotted 2 tiny bears in the distance.  After crossing the waterfalls, one of the tiny bears got a bit bigger.  We stayed with a Park Ranger until he moved away from the trail.  This is taken with the zoom.  The cellphone video is posted on Insta. 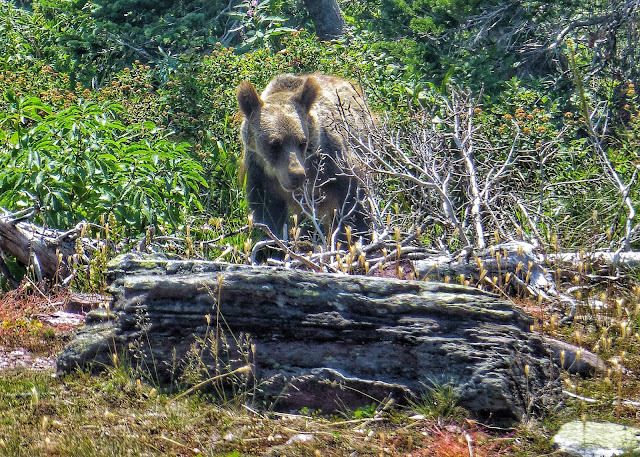 After that it got hotter, and hotter.  When we reached Lake Josephine I waded in to cool off.  There is a boat you can book to take some of the distance off this hike, alas we didn't do that.

This is the view from an inviting bench at the edge of Swiftcurrent.  I had to be promised ice cream to get back up.  The rest of the way back was road and after 8.5 hours we were ready to be done.  We added about a mile to this hike by starting at the Inn.  It was even more spectacular than I thought it would be though. 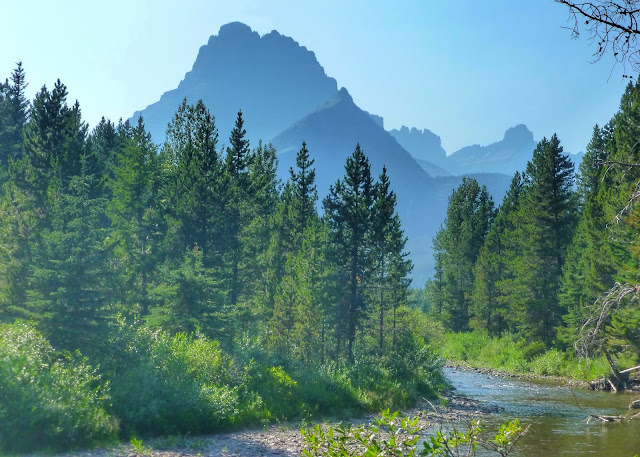