Last year we participated as runners in the inaugural Zombie Survivor event and ever since I have been dying to be a zombie!  I grew up on Romero movies and this was just so thrilling from beginning to end. Or should I say from make-up to beer.

We arrived at 9 for our 11 am zombie shift which would be in the 'penitentiary of the dead'.  Someone is practicing. 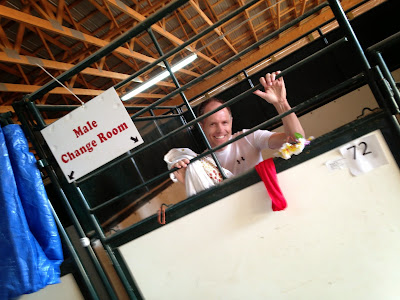 Kev and I spent some time in the change rooms while our outfits were roughed up in a zombie appropriate manner. 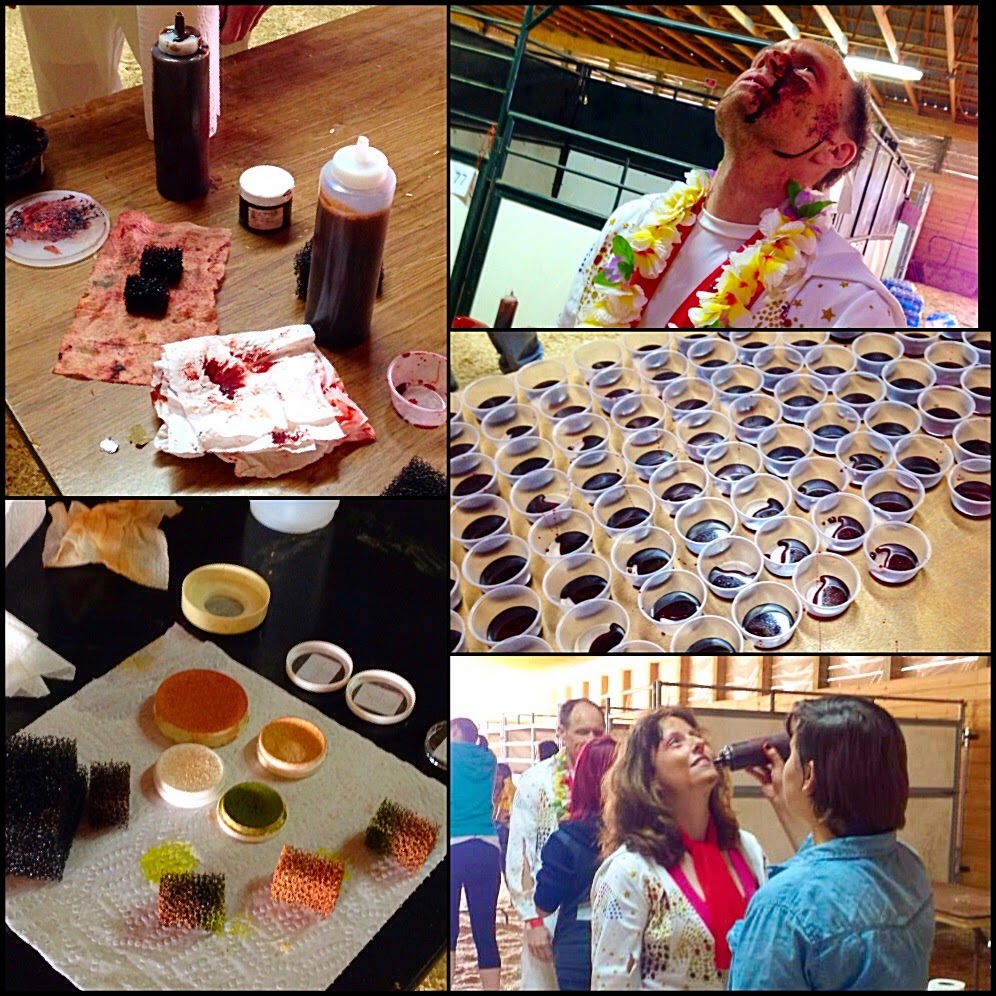 Then it was make-up time.  The cups are full of gloopy red corn syrup, you put it in your mouth then drooled some out, so disgusting. 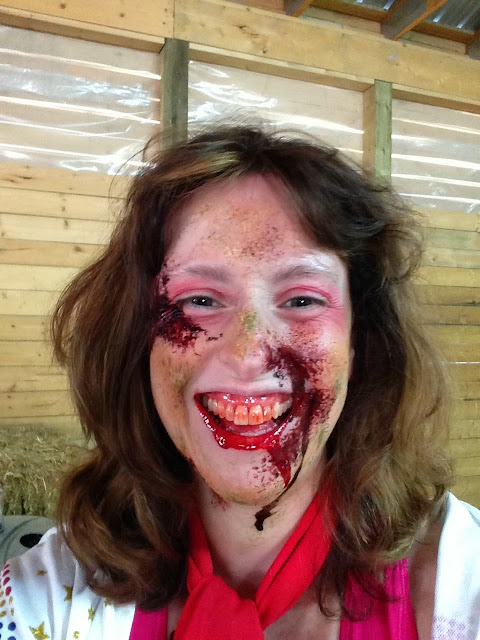 The end result was pretty amazing! 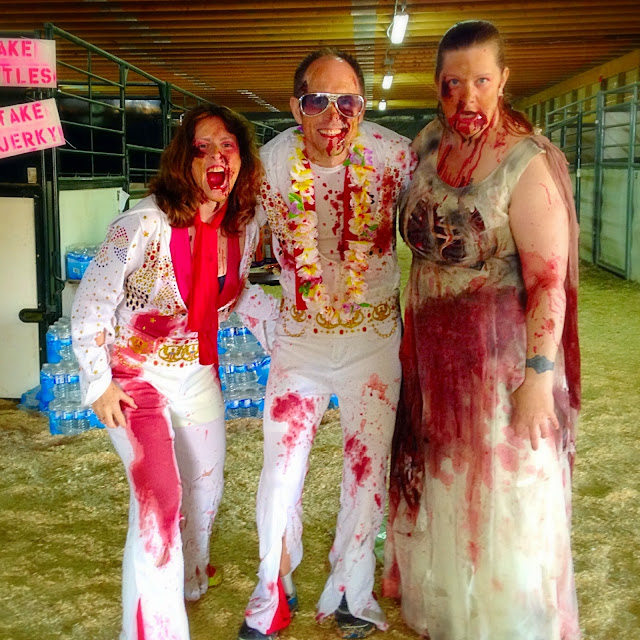 The Elvis suits are from the 2012 RnR Half in Las Vegas, this seemed a fitting retirement.  Our friend is wearing a recycled and modified wedding dress. Great eh?! 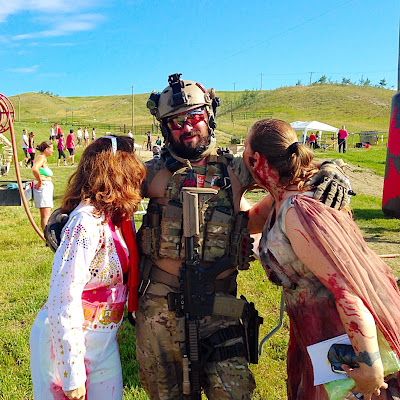 We made a lot of friends, some of whom we may have nibbled on. 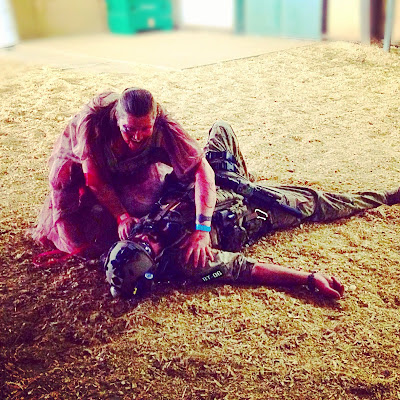 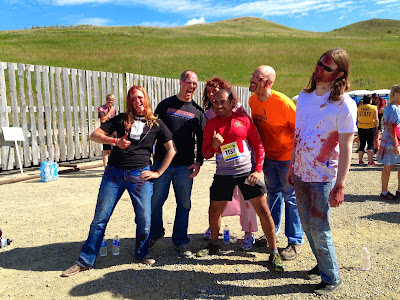 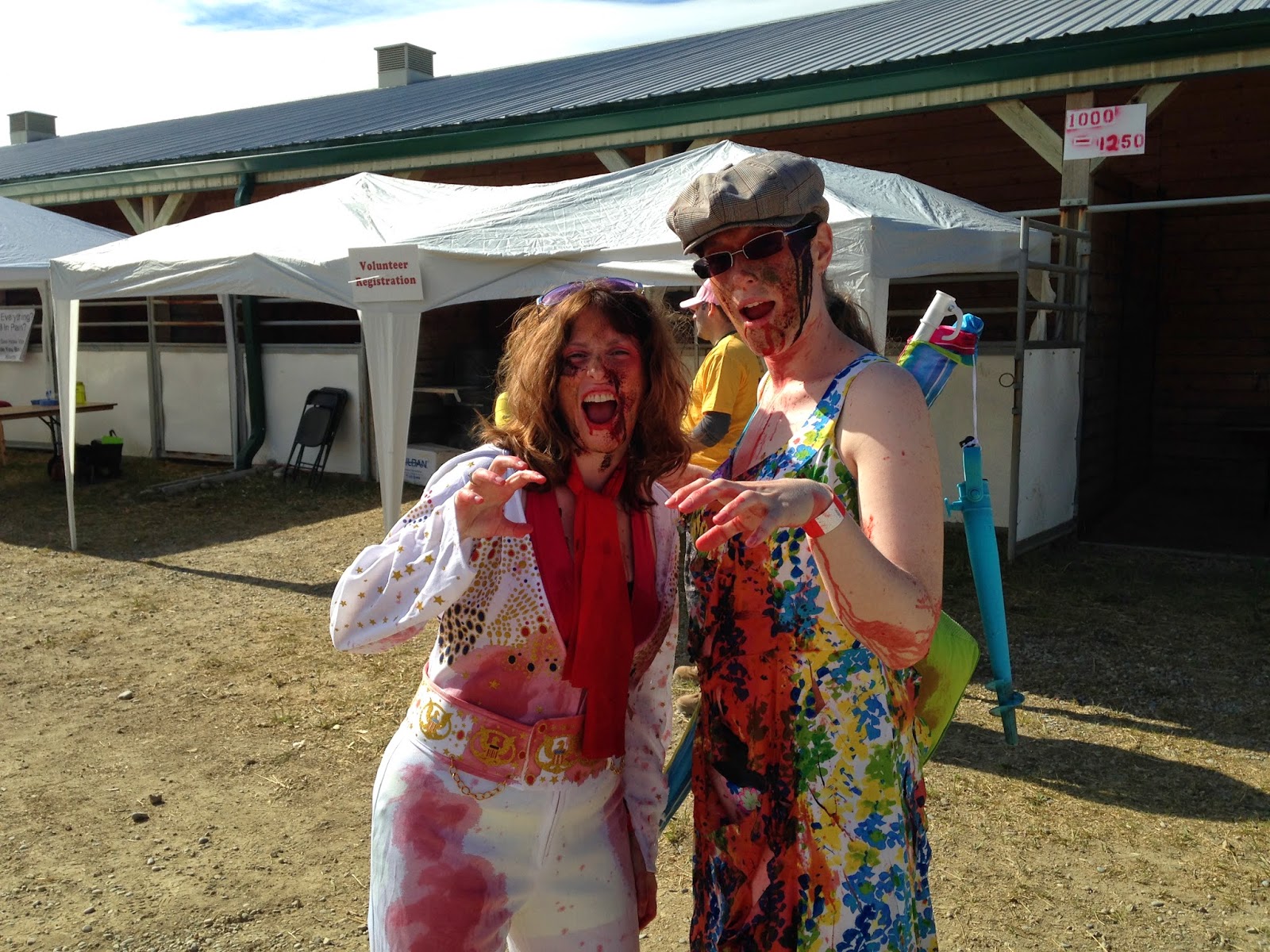 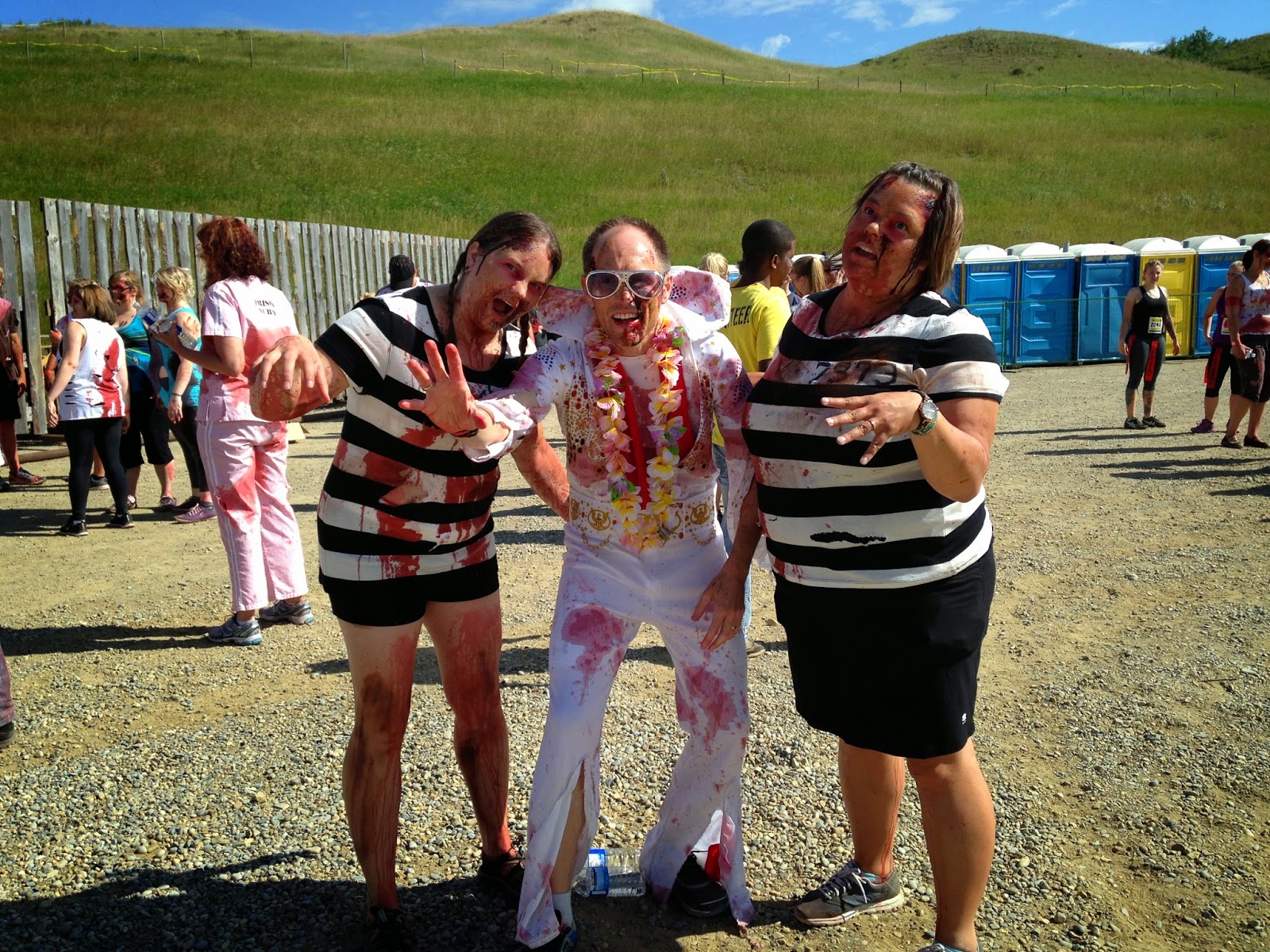 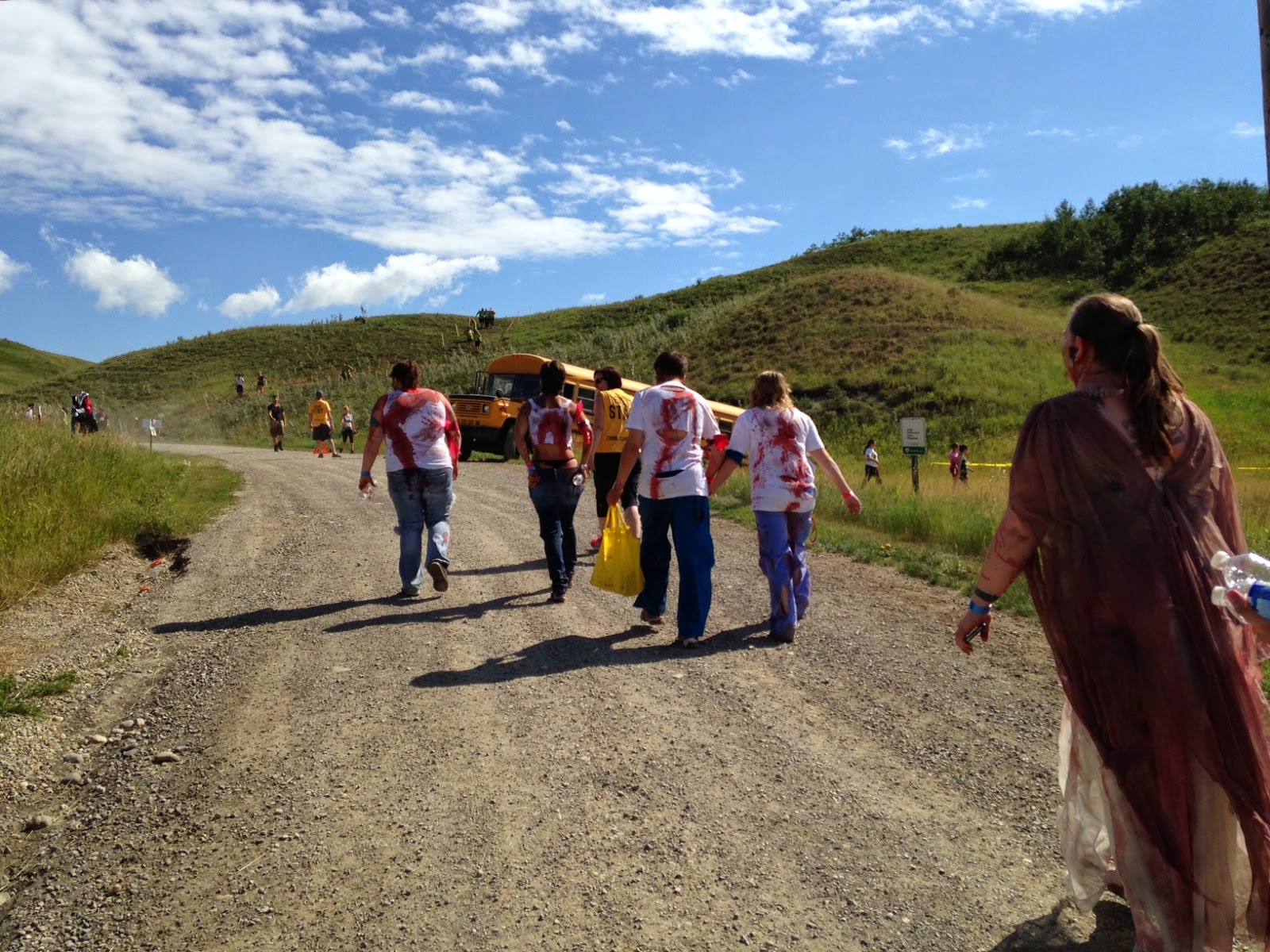 We met up with our awesome zombie leader and trekked off to start terrorizing runners.  Runners had to go through the school bus - so neat. 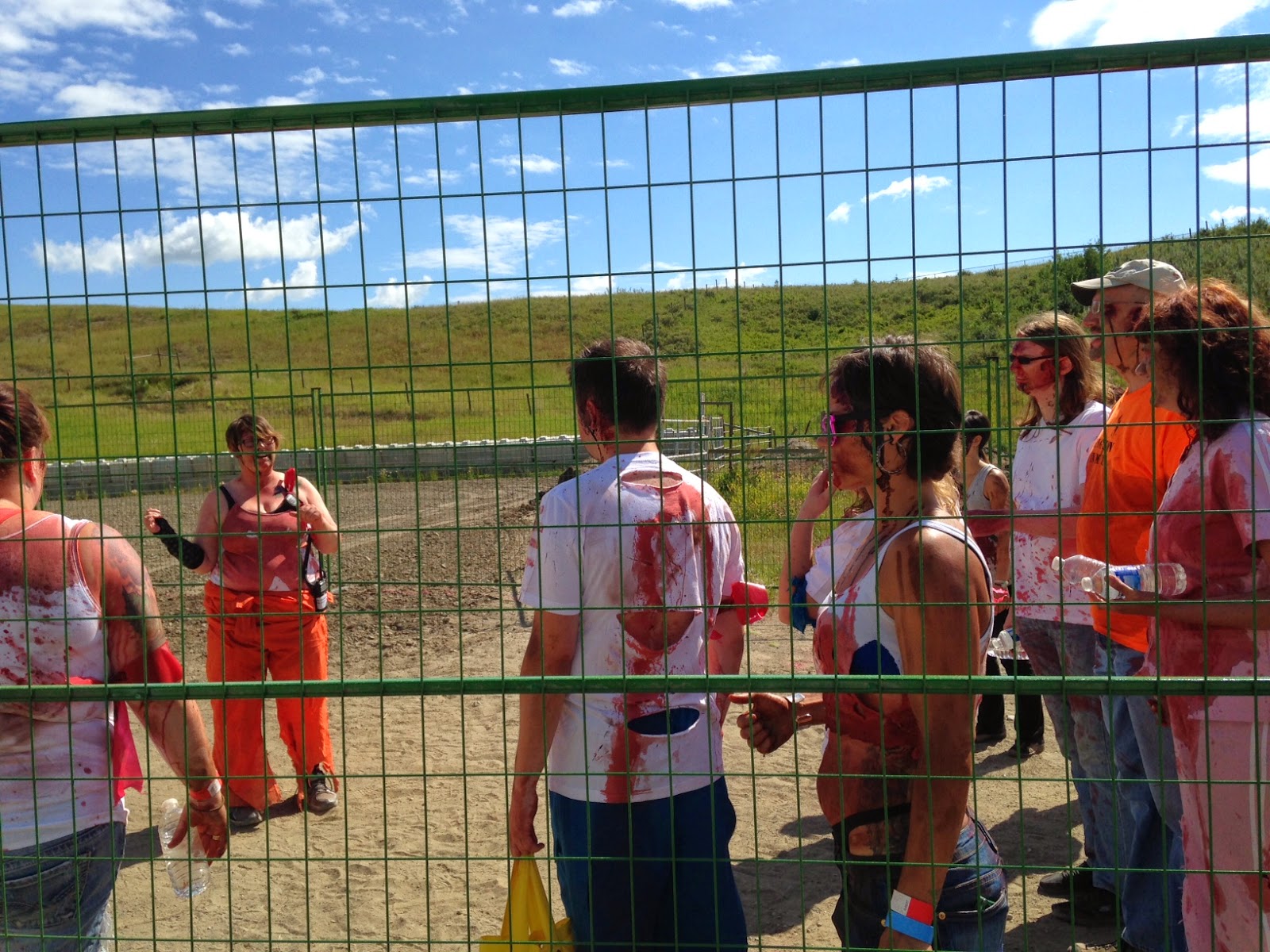 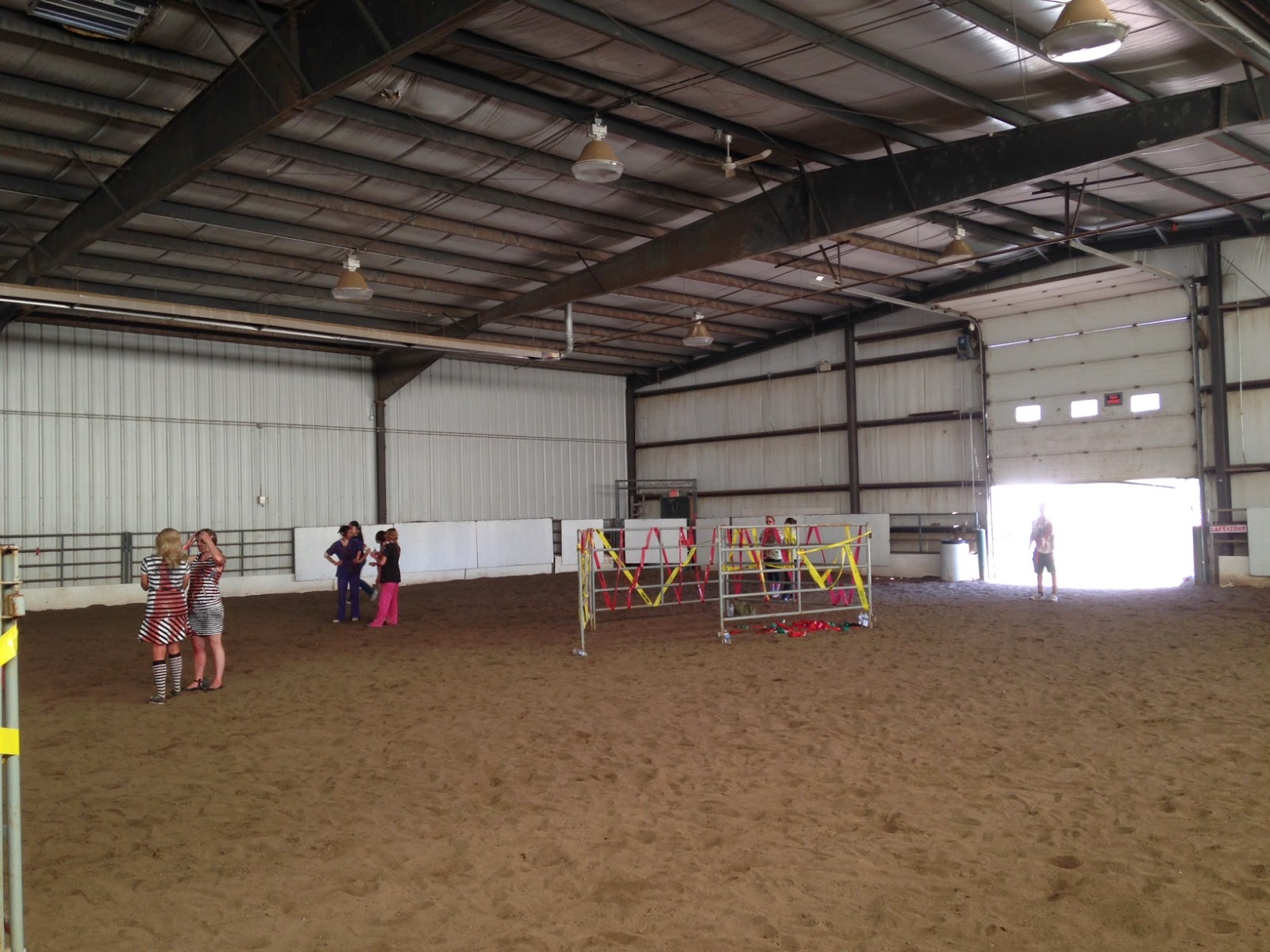 We were stationed in the prison area.  Frightened runners were channeled into the wide open area where we chased them into a dead end before picking them off as they headed for the real exit. 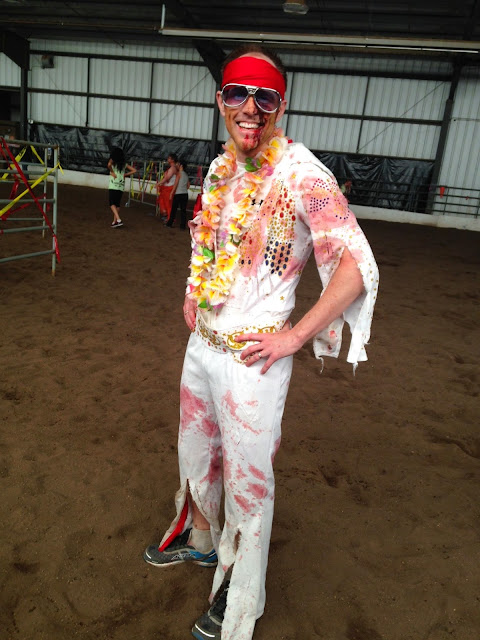 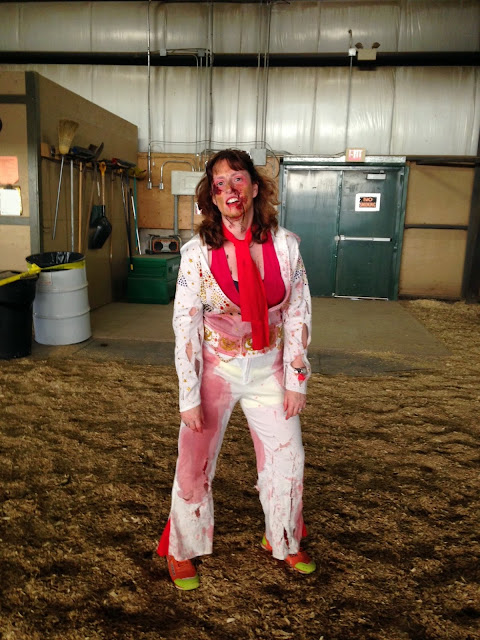 It was easy to tell when runners were coming as the screaming was quite loud. 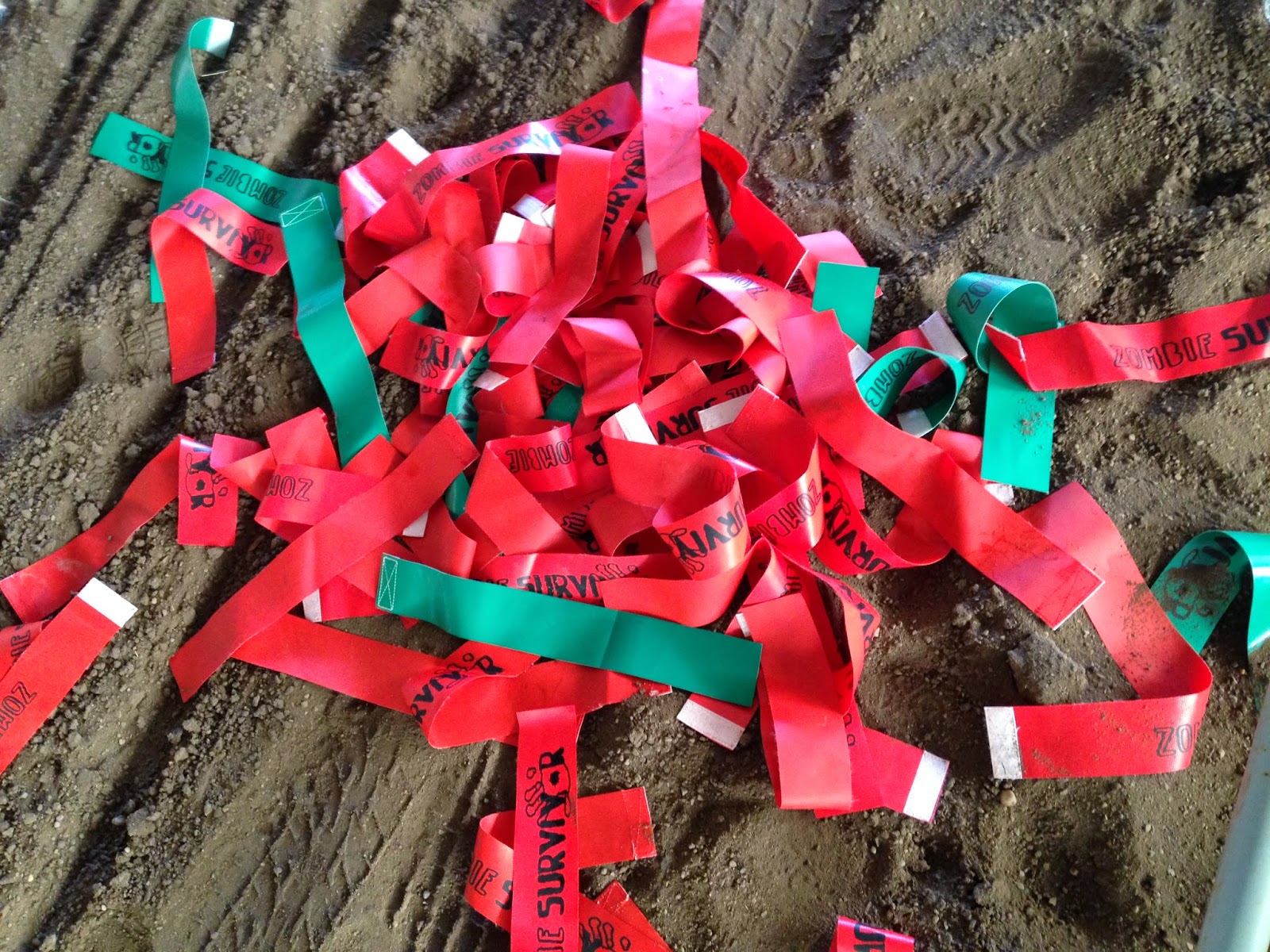 Many lives were taken. 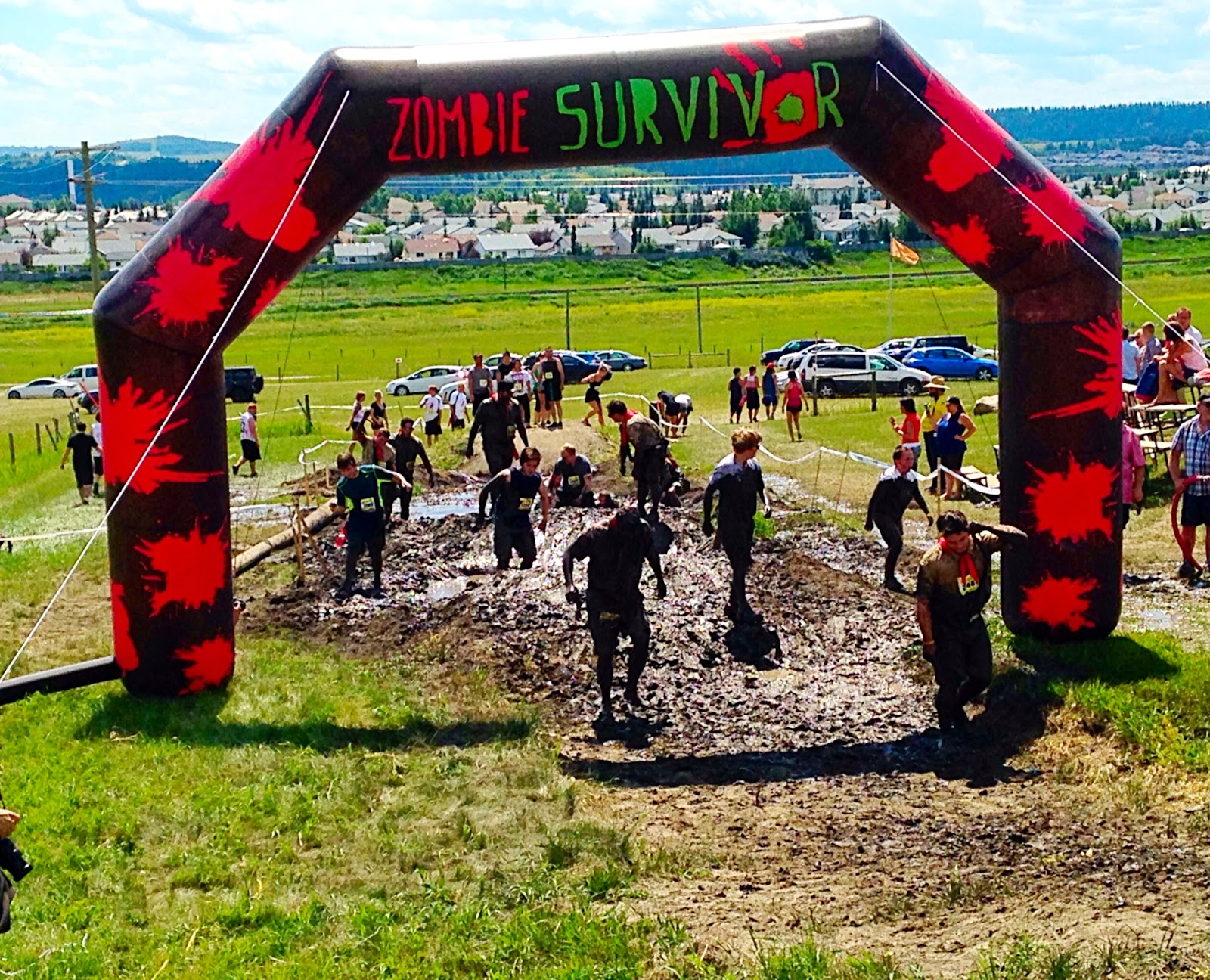 The finish line was a festival of mud and oh so entertaining to watch. Runners kept losing shoes in the pit. 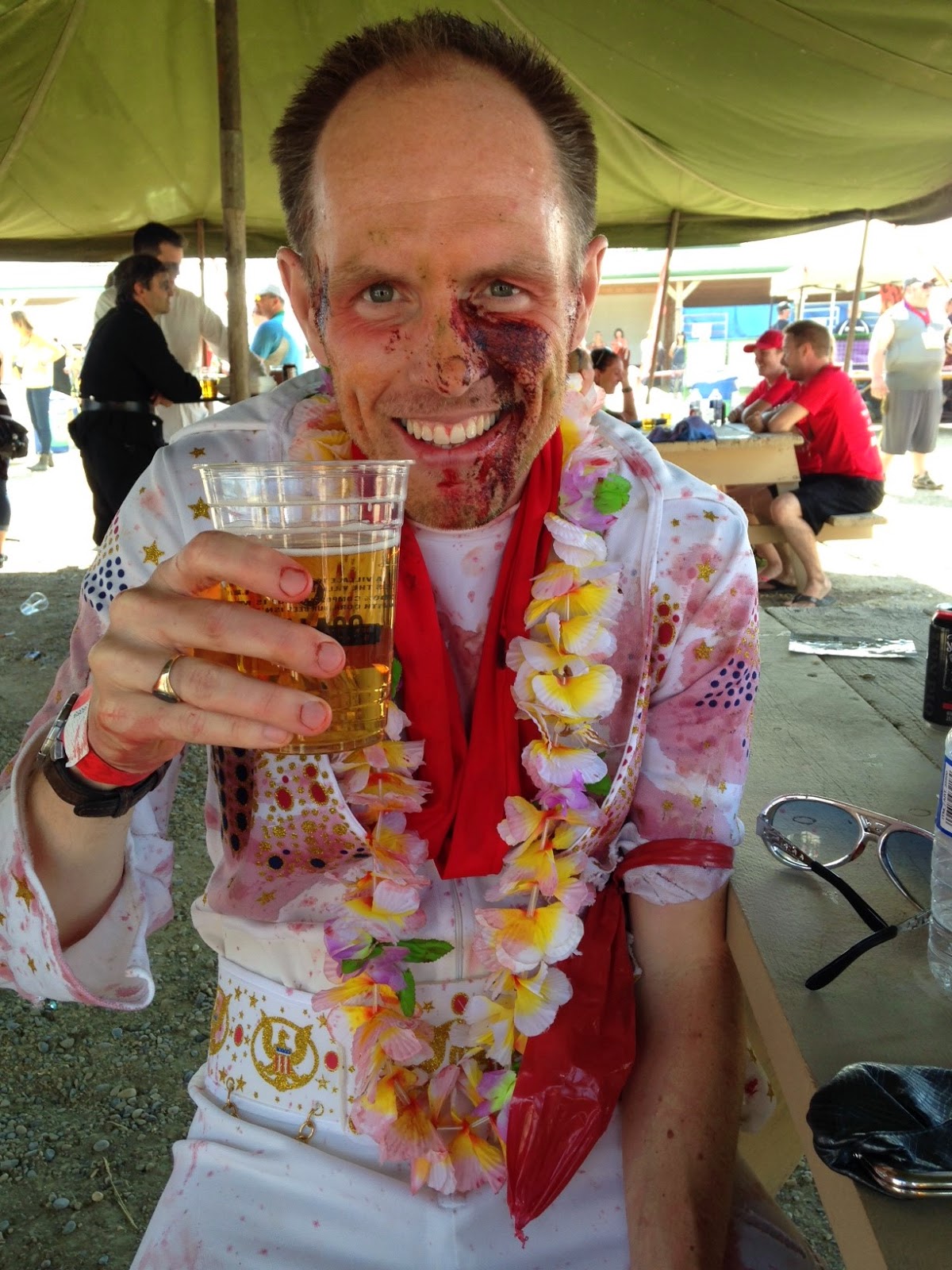 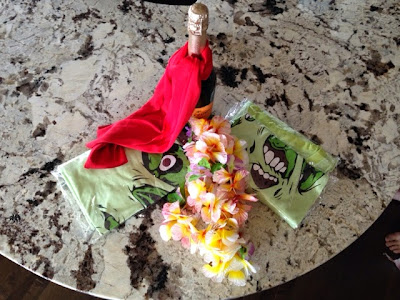 I love the T-shirts this year.  We won the bubbly for the costumes! 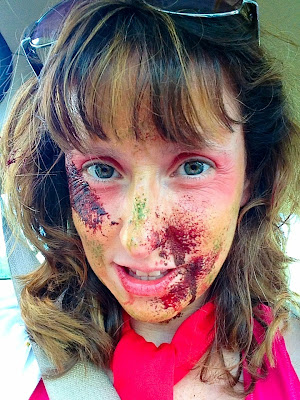 Do I have to take my zombie off now?