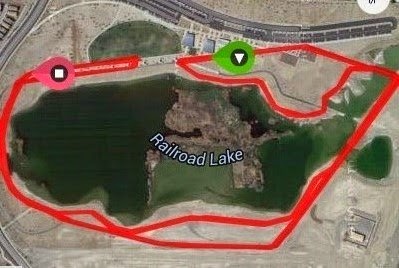 Heading into our first ever 12 hour timed event I was reasonably happy with where my running was at (though I most probably didn't run enough in the lead up to the race) but still a bit apprehensive as after all I was having to be on the move for 12 hours and have never done anything like this before.


As could be expected I don’t remember every detail from the race so here is a recap pulled from the memories I do have and my Garmin. 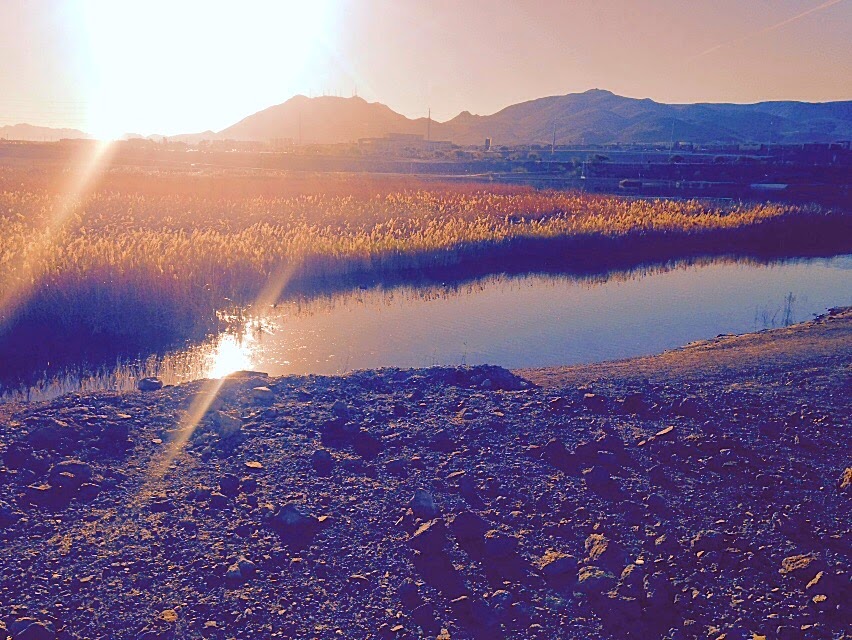 Gorgeously warm, blazing sunshine, walking around in a sleeveless shirt and shorts and it’s just turned 7:45am.  There is not an inch of shade on the course and with 75 minutes to go before the start, something tells me the next 12 hours are going to be interesting…

But we’re here in Vegas to have fun so what better way to start the day than with showgirls? 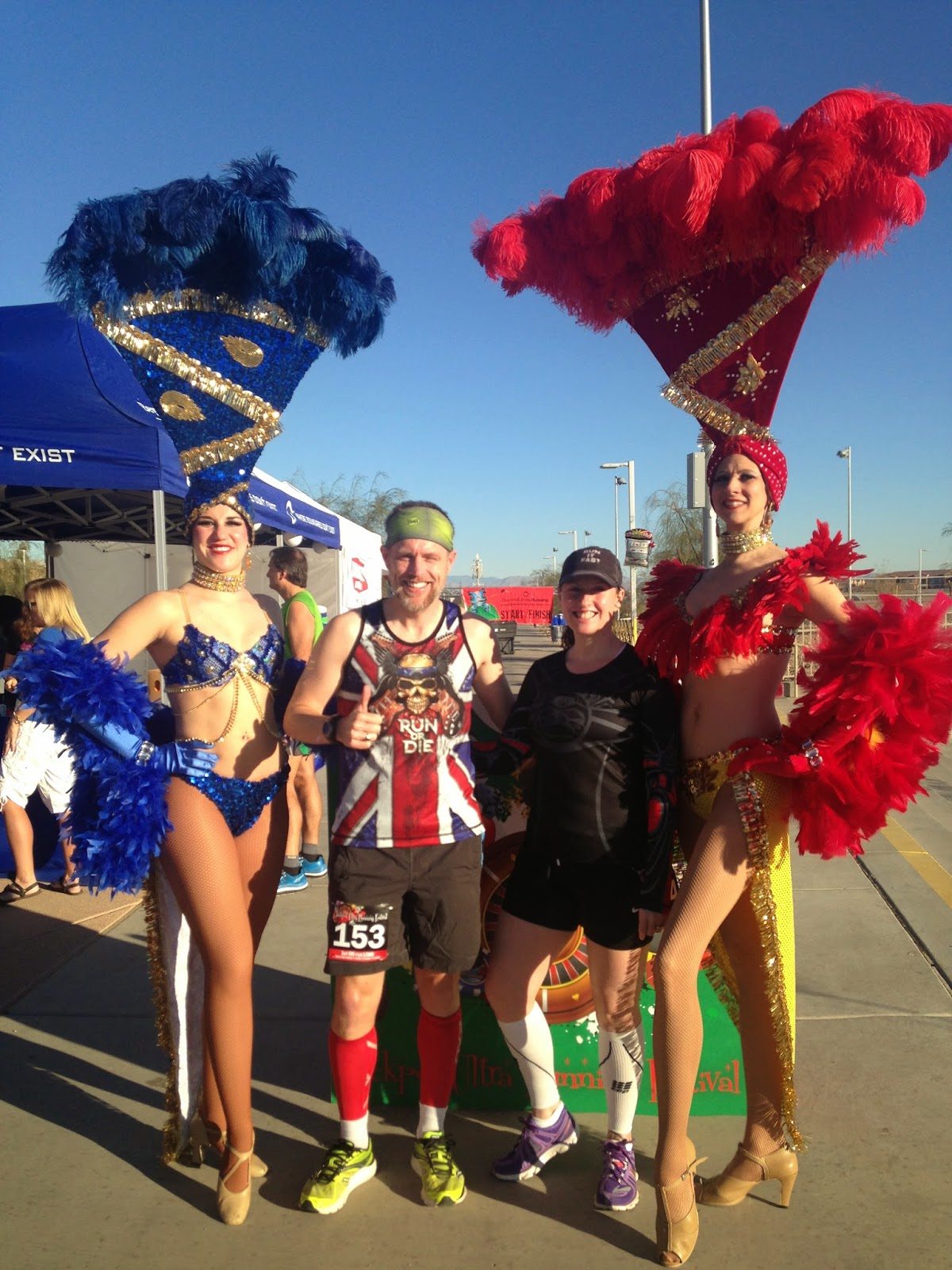 After a quick pre-race speech from the RD we are off and running.  My race strategy is fairly sketchy, the main concept being to keep my pace nice and easy early on.

I hit the 10k mark 1:05 into the race and whilst it’s very hot I’m still feeling really good and pleased I've been able to fight off my urges to run faster. 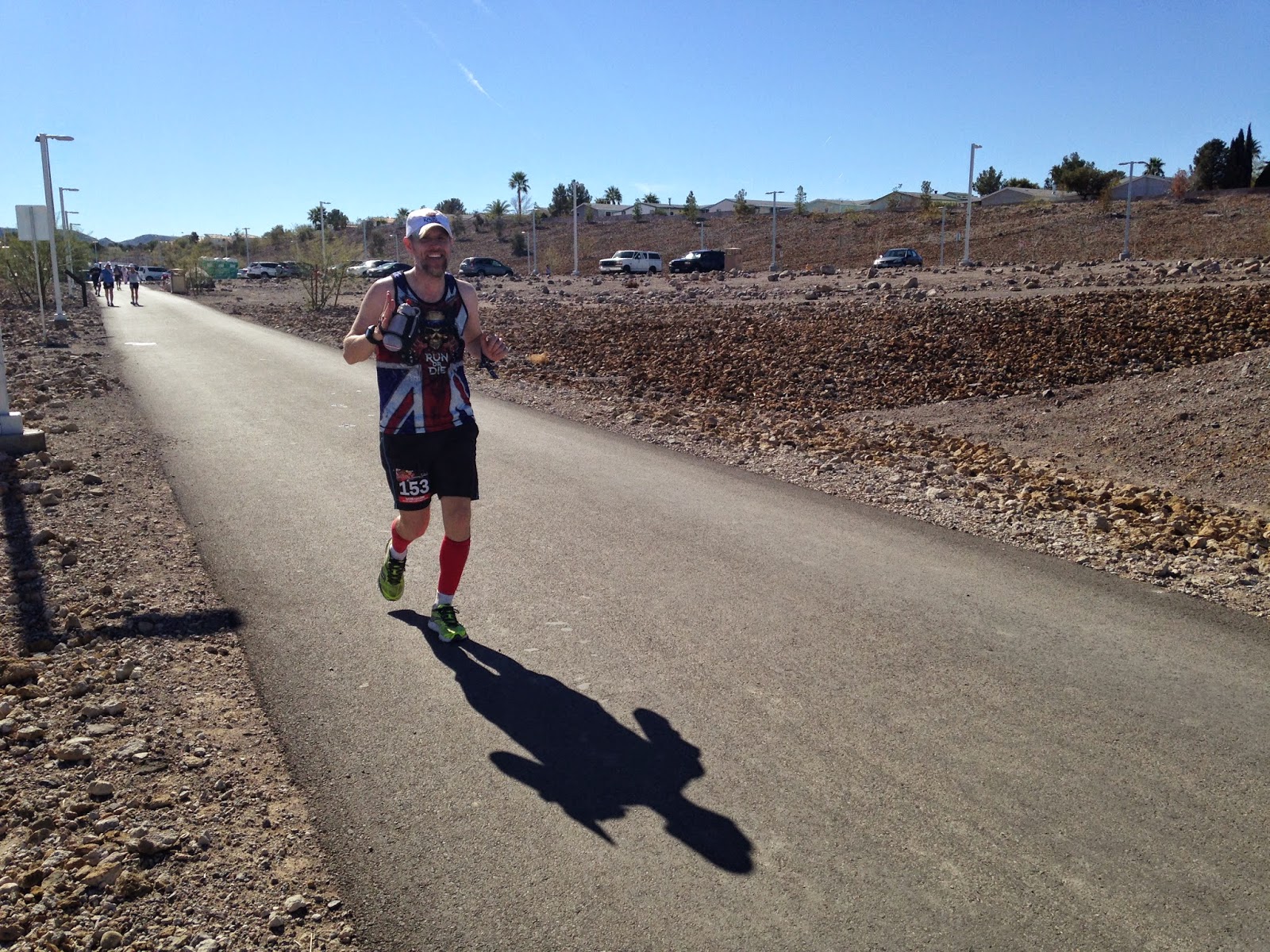 12:30 and all is not well; it’s damned hot so I make a brief stop at base camp to collect my hat, whilst we were hoping Vegas would be nice and warm I wasn't expecting or looking for a record high and scorching sun.

I walked the odd bit with Sue during the first 4 hours and we both decided it would be wise for us to take it easy over the next few hours and try and save some energy for when the sun starts to go down later on (many hours away yet unfortunately) in the day.

The next 10-15 kms are a mix of running and walking (based on my Garmin, more walking than I realized) and thinking back I believe this is where things started to go awry.

As with previous runs in intense heat/sun (Kauai, Maui, Calgary Marathon 2014) I find drinking Tailwind (my main source of energy and electrolytes for the race) doesn’t work too well for me.  At some point around the 4 hour mark I decided to switch to plain water and make up the calories and electrolytes by trying actual food and gels.  Sounds reasonable but I have trouble finding anything I enjoy eating and most attempts end up with stuff getting trashed rather than consumed. 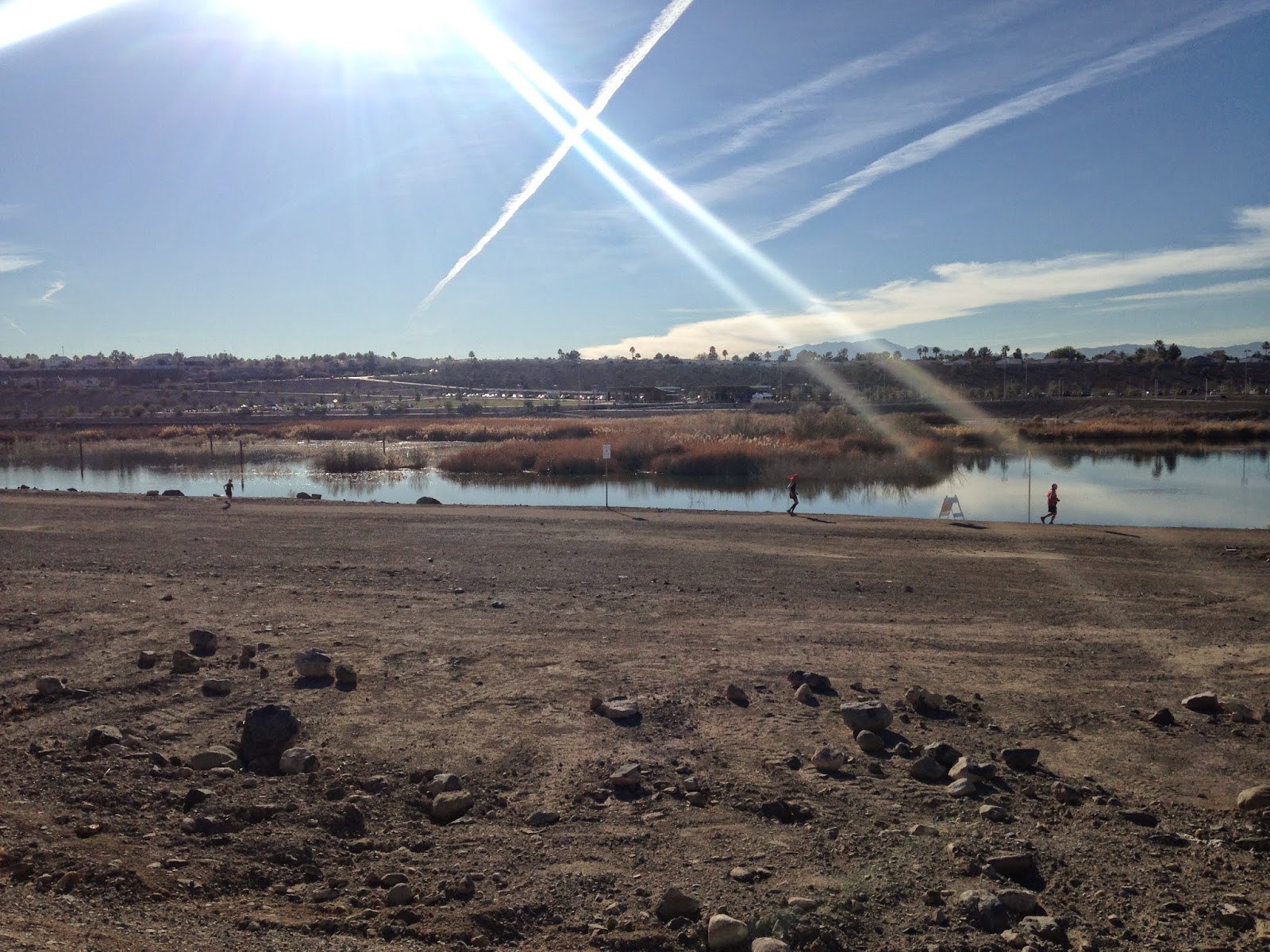 From my watch I see I hit the marathon distance around 5:30 into the day, it was also somewhere around this time that I decided to sit down for 5 minutes and change my shoes, comfy Hokas here I come!

With these lovely pillows strapped to my feet I set off with a renewed sense of joy, however between the heat (will this sun ever go away?) and my increasing lack of energy (I’m over 6 hours in and should really be more concerned with my lack of fuelling at this point) my rejuvenated vitality doesn’t last too long and I’m back to slow running/walking after just 2kms.  Stupidly I again put it down to being super-hot and tell myself all will be well in an hour or two.  Sunset is around 5:30pm which still leaves 3.5 hours to make up lost time.

Over the next couple of hours I finally realize something is amiss, maybe it’s that intense feeling of nausea and a desire to crawl in a cool dark hole and lay down for an hour or two, at this point I set about trying to find a food that will work for me (doesn’t go well) and randomly popping salt caps from the aid station.  Of course I’ve never used these before and have no idea how many I should be taking. 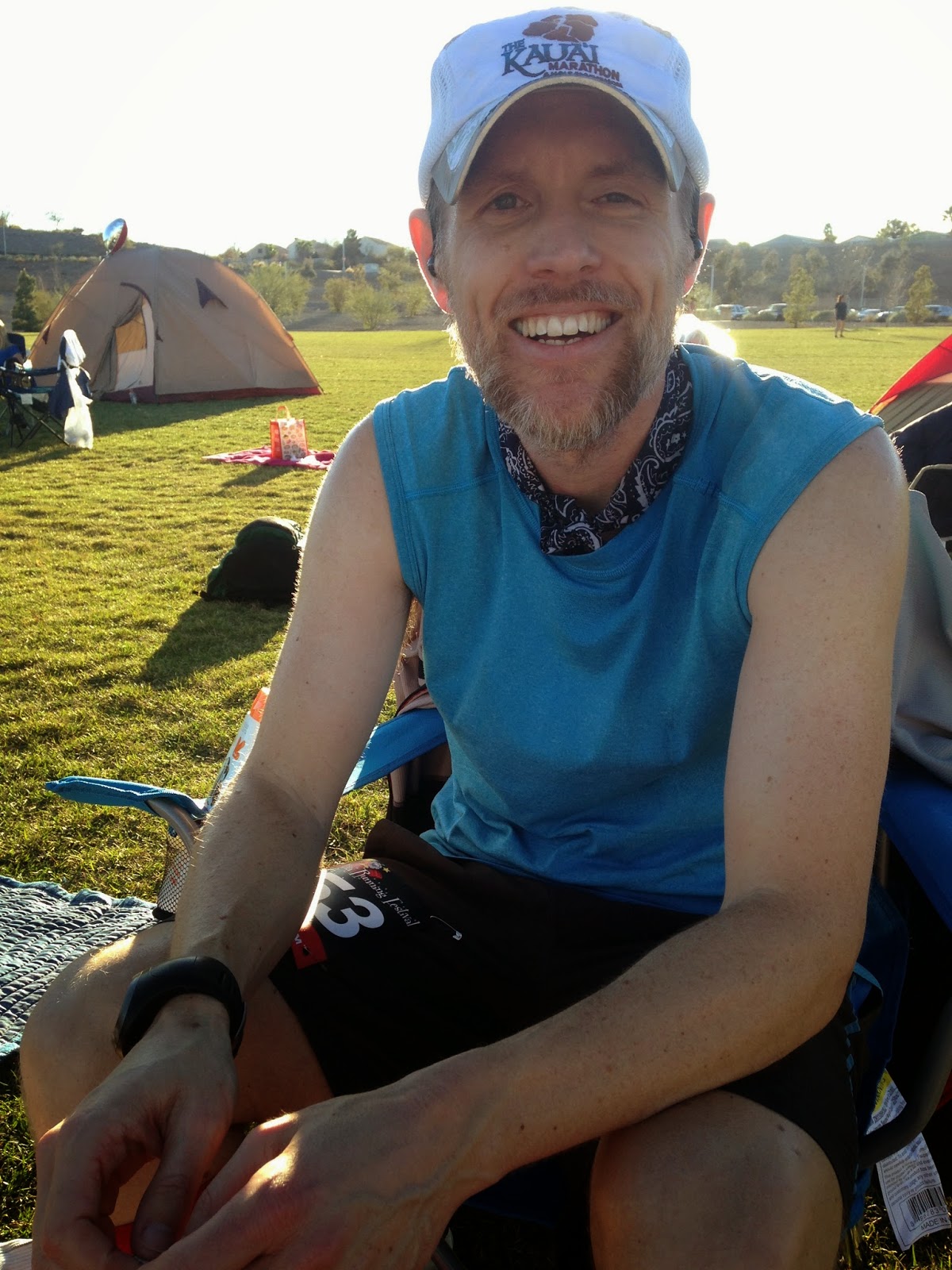 This leads to a rather foggy 5 hours or so, where I go from feeling like utter crap and trudging along to feeling fresh as a daisy and running like it was the start of the race.  One very vivid memory is with about 4 hours to go I feel awesome, I see I’m right around the 60k mark and if I can keep a nice steady 6 min/km pace I can hit the beguiling target of 100k, no problem!

The first 10k (hour) goes perfectly and I almost allow myself to think it might be possible, but within 30 minutes it’s all gone down the drain and I’m back to walking.  During the last hour the sun has finally started to set and there is even shade on parts of the course, unfortunately I have no energy with which to take advantage of this event.

It takes some time but I eventually make peace with myself that 100k means nothing and that 50 miles would be an awesome achievement, however by now my Garmin has died and I spend most of my rational thoughts constantly trying to calculate whether I can make the 50 mile mark or not.  I’ve been in a mire of misery for a while now and I cannot shake the nausea I’ve been battling for what feels like forever.  Add to that my lack of running/generating heat and I realize it’s actually has gotten quite chilly. 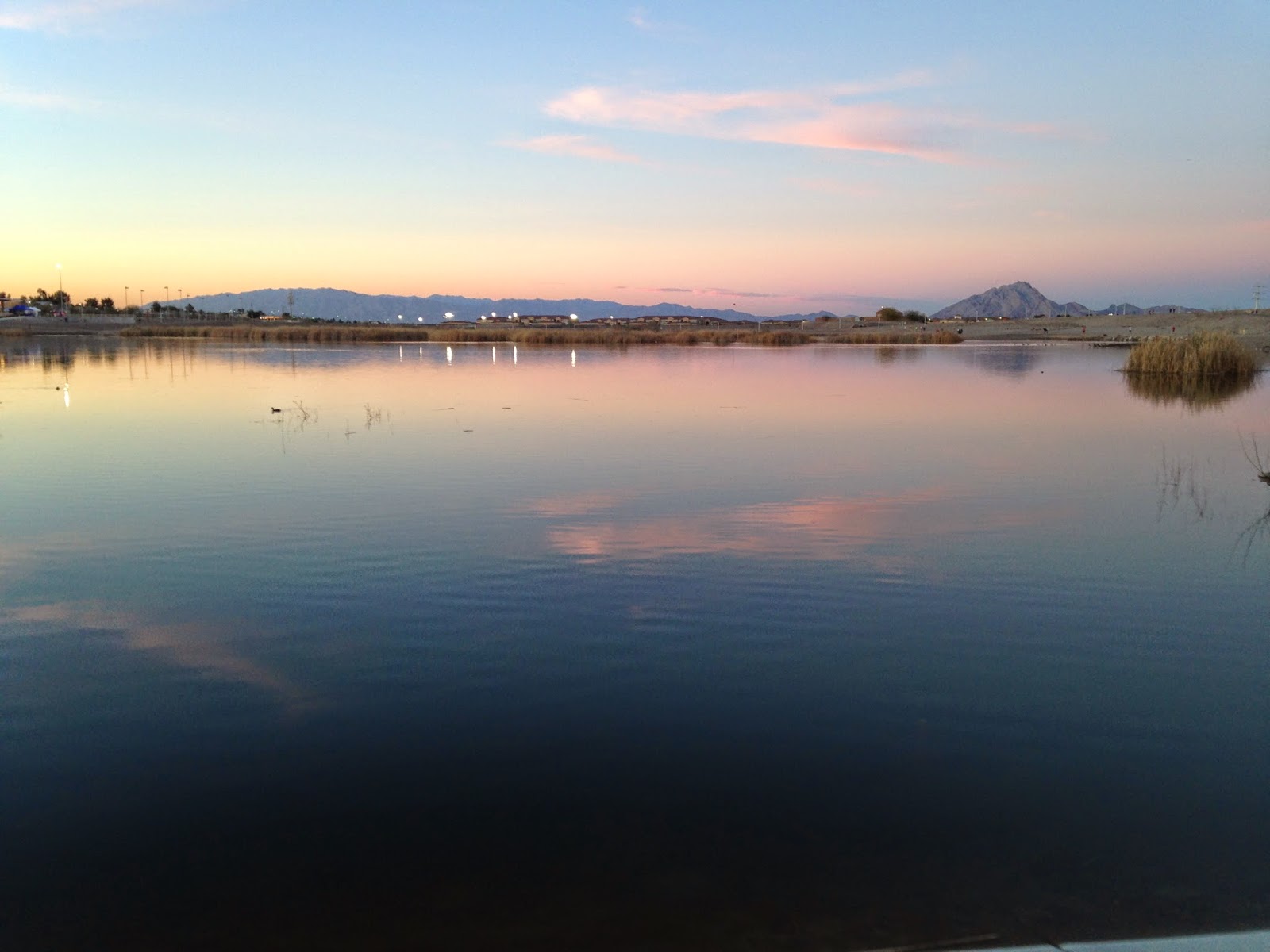 The next hour is a blur though I remember talking to Sue and she tells me she is on track for 40 miles which is just awesome, I’m somehow able to run the odd mile or two and I manage to keep going enough to hit the 50.98 miles just before the finishing horn reverberates around the park.  I’m deliriously happy to be finished and collapse into our little camping chair and wait for Sue to return from wherever on the course she is. 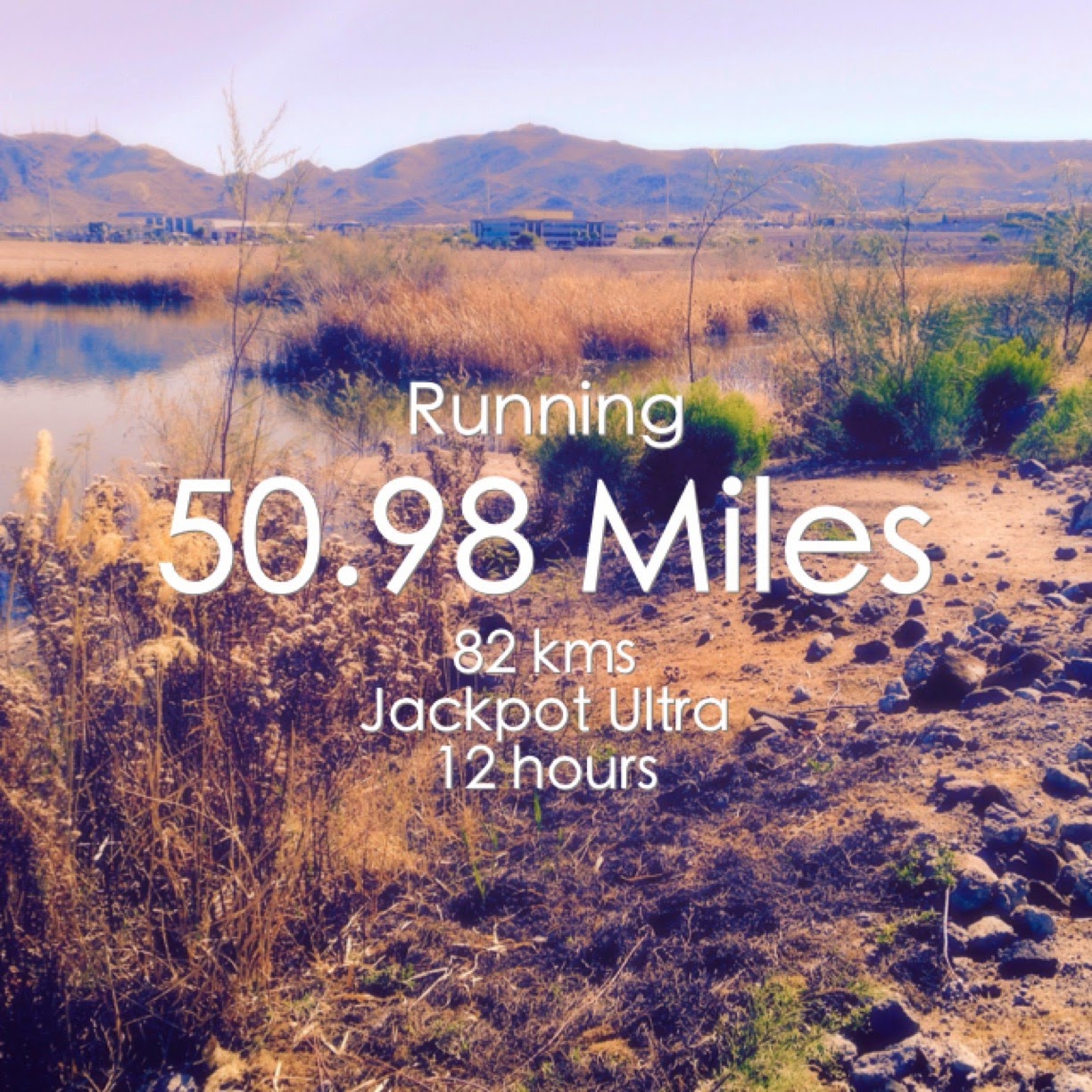 Now a week later and these are my final thoughts on the whole experience: 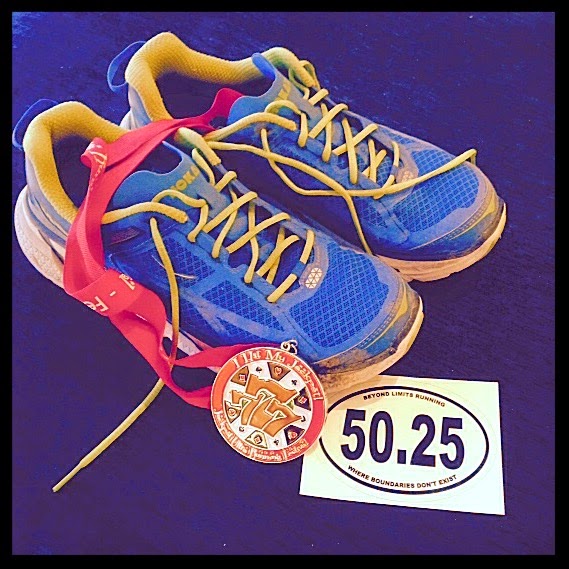