The weather forecast for Saturday morning kept changing, even from the night before to the morning of.  At one point we were actually thinking of shorts.  The final decision of North Face jacket & long trousers, gloves and woolly hats worked out really well. 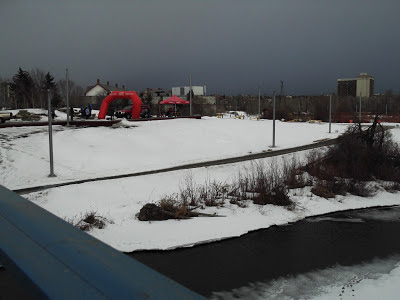 The sky is dark grey as we arrive at the car park in Inglewood.  As we cross the bridge we can see the Running Room staff fighting the wind to get the start/finish line up.  We hustle into Fort Calgary for some warmth and shortly afterwards the snow starts, a big fluffy blizzard.  By the time we all head out it has mostly stopped but still coating the pathway.  The start takes me completely by surprise and we end up at the very back.  Heading toward the Riverwalk there is a long stretch of slush/ice to get around, then the snow picks up again about 2k in and it feels like grit blowing in my eyes. 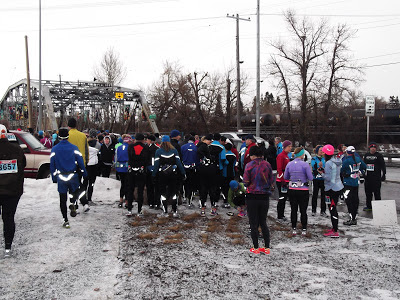 The route up to Crowchild Bridge and the first water station (just before 6k) is hard going, I try to break it down and just think about getting to the bridge.  The volunteers are trying to stop the cups blowing away.  The next point I focus on is getting to the turnaround at 10k, there is a strong headwind all the way up.  Runners are now passing me on their way back, including Kevin.  I have a break at the turnaround for water then Gatorade, I can’t be bothered fighting a GU package.  This experiment works well, though trying something new mid race is not my smartest moment.

As we head back out onto the course, the wind has either stopped or is behind us - finally.  The next section is very pleasant, great views of the river and people out walking their dogs encouraging the runners.  I go surfing on a patch of ice, first on one foot then the other but somehow stay I stay upright.  Matrix moves!  Before I know it we’re at 16k and another water station.  The poor guy behind the table is on sheer ice.  The sun has come out now.

We take the bridge over the river at Kensington in a change to the posted route.  We are retracing our steps and pass a 3k sign facing the other way.  Quite a few people are out on bikes or running near Eau Claire.  The headwind picks up again at 17k.  I have one slower km but otherwise my pace has been fairly consistent and for once I don’t feel like I want to lie down or expire after 15k. The 2:15 pace bunny is finished and directing runners up the last stretch of 9th Ave and we are done.  Time for the hot buffet at Fort Calgary! 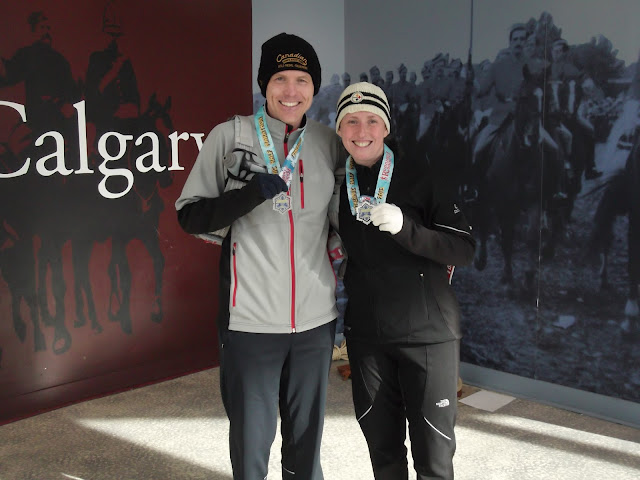 I really enjoyed this race, the main reason for registering was to get out training in January so I was delighted to come in at 2:20. Only 2 mins off my 2012 PB.  Kev skidded on ice and tweaked his knee, finish time 1:56.  There were only 215 runners in my wave so we were quite spread out, though I could always see at least 2 others.  It was -1° with wind chill of -6°.  I ditched the gloves very early on but needed the hat for my ears.  I think it was -23° on race day in 2009!  I’ll have to remember that when thinking about next year. 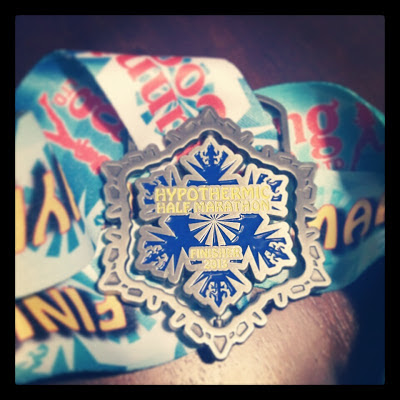